‘No matter what may be going on in the world around you, you can persist with this deeper truth, this deep internal compass that guides you’ (Dan Siegel) 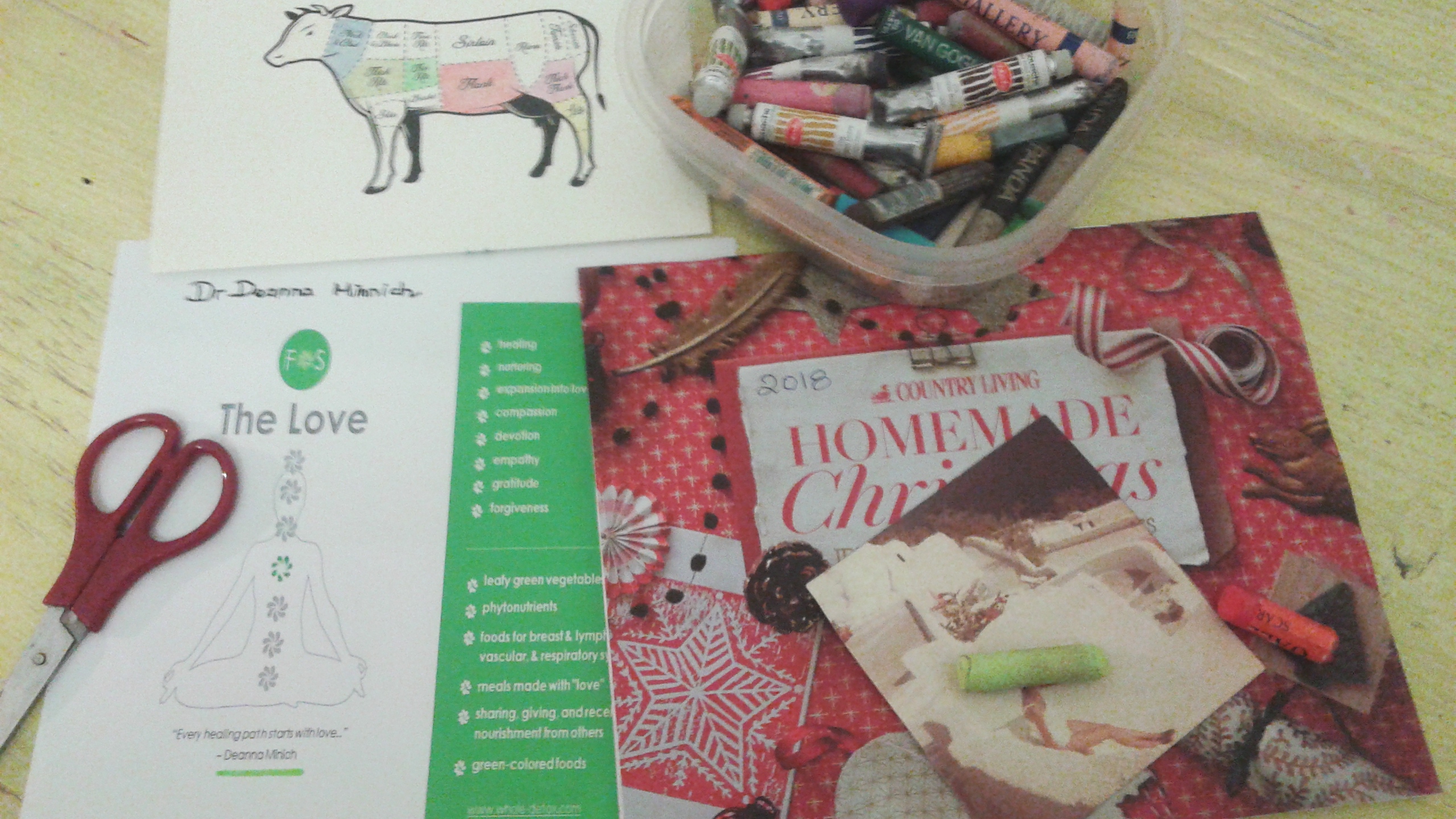 Today I’d like to share two art activities. The first one is from Allyson Bright to do with our name or names.  Most of us have answered to more than one name in our lifetime. It maybe a nickname or pet name used by friends or family. Different people may use different versions of our names, which may be containers of love and tenderness, teasing, others’ expectations of us or their projections. We also have names that may define our roles at different phases in our life like Mom or Miss (teacher). Allyson Bright suggests we create a page about one of these alternate names – whether you loved it or hated it. I created a collage about my full name, Antonia, and then did some additional writing. This is Allyson Bright’s story of her pet names: ‘I grew up in the 80s, and the Rainbow Brite cartoon was soaring in popularity. Given my last name was Bright, it wasn’t long before the kids at school embraced calling me Rainbow. I didn’t like it at first, but I eventually embraced it – off and on, people called me Rainbow all the way through high school. I had one friend who tired of calling me Rainbow and decided I should go by Roy – as in Roy G. Biv. Rainbow Brite has been a huge part of my name, and somehow I feel like that just makes sense. Just like my cartoon namesake, I too, try to spread as much happiness and color into the world as possible’.

An activity I sometimes engage with is based on Dr Dan Siegel’s wheel of awareness practice. So sometimes after engaging with the practice I may go on to do some art using the wheel visual metaphor or vice versa or/and writing. Today I have posted a small sample I made this morning. The wheel of Awareness is a research based practice to expand the container of consciousness and is a visual metaphor for the way our mind works. Dan Siegel writes ‘It occurred to me that our awareness could be seen as lying at the center of a circle— a hub, if you will— from which, at any given moment, we can choose to focus on a wide array of thoughts, images, feelings, and sensations circling us on the rim’. Briefly, the first segment contains our first five senses: hearing, sight, smell, taste, and touch; the second segment represents another category of what we know like the interior signals of the body, such as sensations, and the third segment contains the mental activities of feelings, thoughts, and memories. The fourth holds our sense of connection to people, nature, the universe. Below is a guided meditation script from his book AWARE: 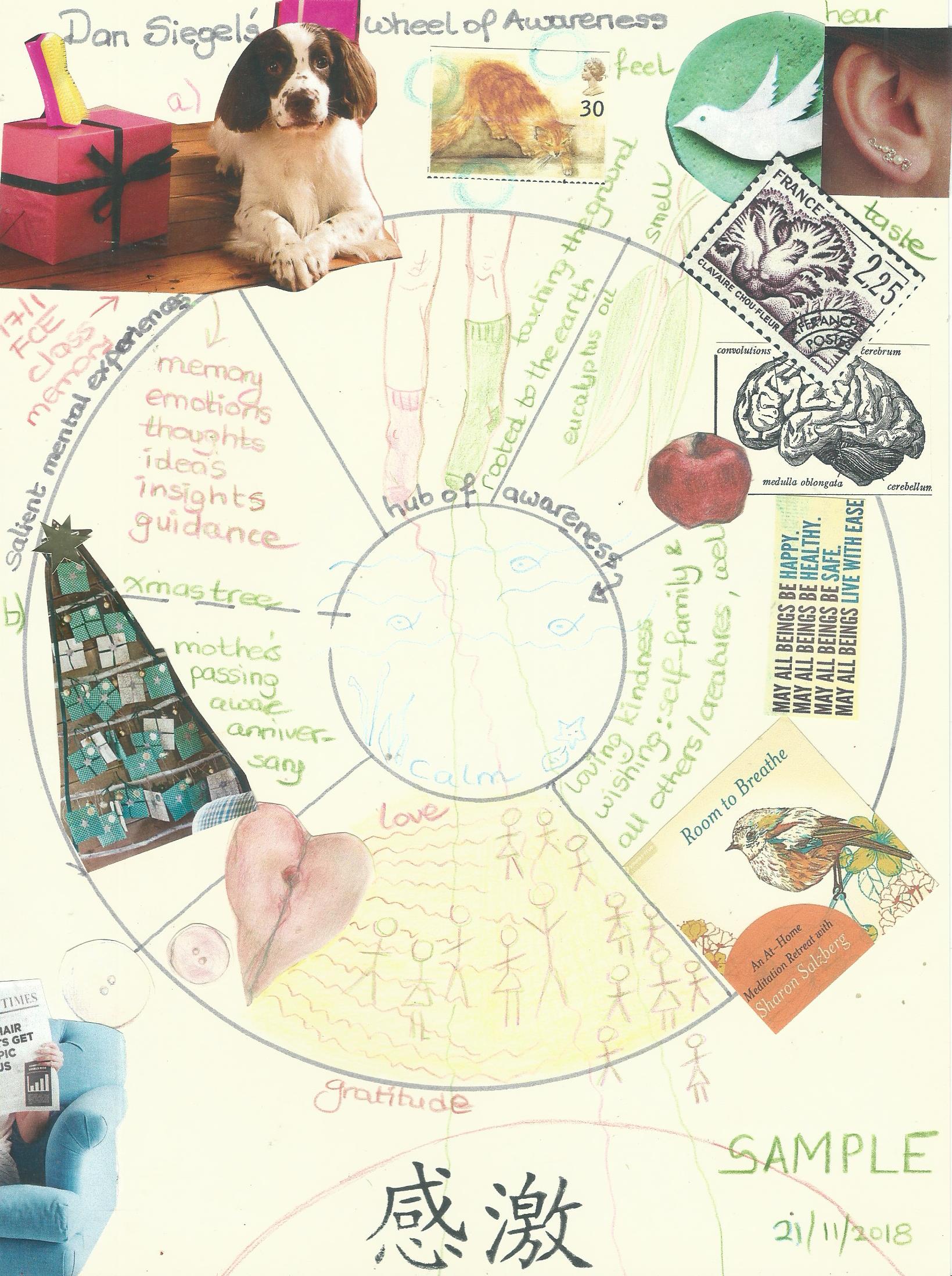 ‘… FIRST FIVE SENSES ON THE FIRST RIM SEGMENT: Let go of the breath as a focus of attention and begin the focus on the first segment of the rim— the first five senses, attending to one sense at a time: hearing, sight, smell, taste, touch.  INTEROCEPTION ON THE SECOND RIM SEGMENT: Take a deep breath and move the spoke over to the second segment of the rim, which represents the internal signals of the body. Systematically move the spoke of attention around the body…… (As you can see, in the sample I have posted here, when I reached the legs I feel rooted to the earth, I am touching the ground arose). MENTAL ACTIVITIES ON THE THIRD RIM SEGMENT: Take a deep breath and move the spoke over to the third segment of the rim, which represents mental activities. First part: Invite any mental activity— feeling, thought, memory, whatever— into awareness. Many things may arise or nothing may arise; whatever happens is fine. (Today I was surprised by a memory of a gift I had received ages ago on my name day from one of my classes. They had presented me with a large carton box and had led me to believe that it contained a puppy, but it turned out to be filled with gifts for me and my dogs. So the box had a blouse, a book, maybe some other things, too, as well as, dog treats and toys). Second part: Again, invite anything into awareness, but this time pay special attention to the way mental activities first arise, stay present, and then leave awareness. If a mental activity is not immediately replaced by another activity, what does the gap feel like before a new one arises? (A Xmas tree metaphor arose from Elizabeth Lesser book Marrow: A Love Story. She writes ‘the scanner records the energy given off by the radioactive substance and turns it into three-dimensional pictures. Areas of the body that contain the energy of cancer light up like bulbs on a Christmas tree…. The Christmas tree of her body lit with cancer energy everywhere’). HUB-IN-HUB WITH AWARENESS OF AWARENESS: Before we move the spoke of attention over to the fourth and final segment of the rim, we will explore the hub itself. In other words, we will strengthen our ability to be aware of awareness. This can be accomplished by imagining the bending of the spoke of attention around so it aims itself back into the hub; some prefer the image of retracting the spoke or simply leaving the spoke of attention in the hub of awareness. Whichever notion or visual image works best for you, the idea of this part of the practice is the same: awareness of awareness itself ….. You can now get ready to straighten and extend the spoke to the fourth and final segment of the rim, our relational sense. RELATIONAL SENSE OF OUR FOURTH RIM SEGMENT: In this final segment of the rim review, we’ll explore our connections with other people and things outside of these bodies we were born into. Let’s begin with a sense of connection to those physically closest to you right now. Open to the connection to friends and family . . . to a connection to people you work with . . . to people who live in your neighborhood, who share your community . . . who live in your city. . . . Open to a sense of connection to those who share your state or region . . . to people who live in your country. . . . Now open to a sense of connection to all people who live on earth . . . and now see if you can open that sense of connection to all living beings on earth. STATEMENTS OF KIND INTENTION: Now, knowing that science has recently revealed what wisdom traditions have known for many years— that cultivating intentions of kindness, care, empathy, and compassion can bring positive changes into our inner and interpersonal worlds— I invite you to repeat the following phrases silently, in your inner mind.….. May all living beings . . . be happy. May all living beings . . . be healthy. May all living beings . . . be safe. May all living beings . . . flourish and thrive. Now, taking a deeper breath, we send those same wishes, now more elaborate, to an inner sense of who we are, to a Me or I: May I . . . be happy and live with meaning, connection, and equanimity, and a playful, grateful, and joyful heart. May I . . . be healthy and have a body that gives energy and flexibility, strength and stability. May I . . . be safe and protected from all sorts of inner and outer harm. May I . . . flourish and thrive and live with the ease of well-being’.