I am at a take away food shop waiting for the woman to wrap my souvlaki. While she’s wrapping the food she is talking about eye disease, swelling, blindness and eyeliners. It sounds very familiar, but I can’t seem to recall what it reminds me of, instead I wonder whether the application of kohl under babies and children’s eyes in India and other cultures is safe. She gives me my small packet and as I walk out of the door it comes to me. While I was doing a Master’s degree, a friend and colleague, was in the habit of telling me similar stories during our lunch break while she corrected her eye make-up. Maybe this popped up now because my Masters Programme dynamics and events have been on my mind lately, even though I can now look back from a different place of understanding and even appreciate the gift in that unbelievable silencing assault. By enrolling in that programme at that point in my life, I was at some level, trying to bring together my interest in psychology, trauma, post traumatic suffering and adaptations, as well as, art, creativity and writing, and maybe create something out of all that. 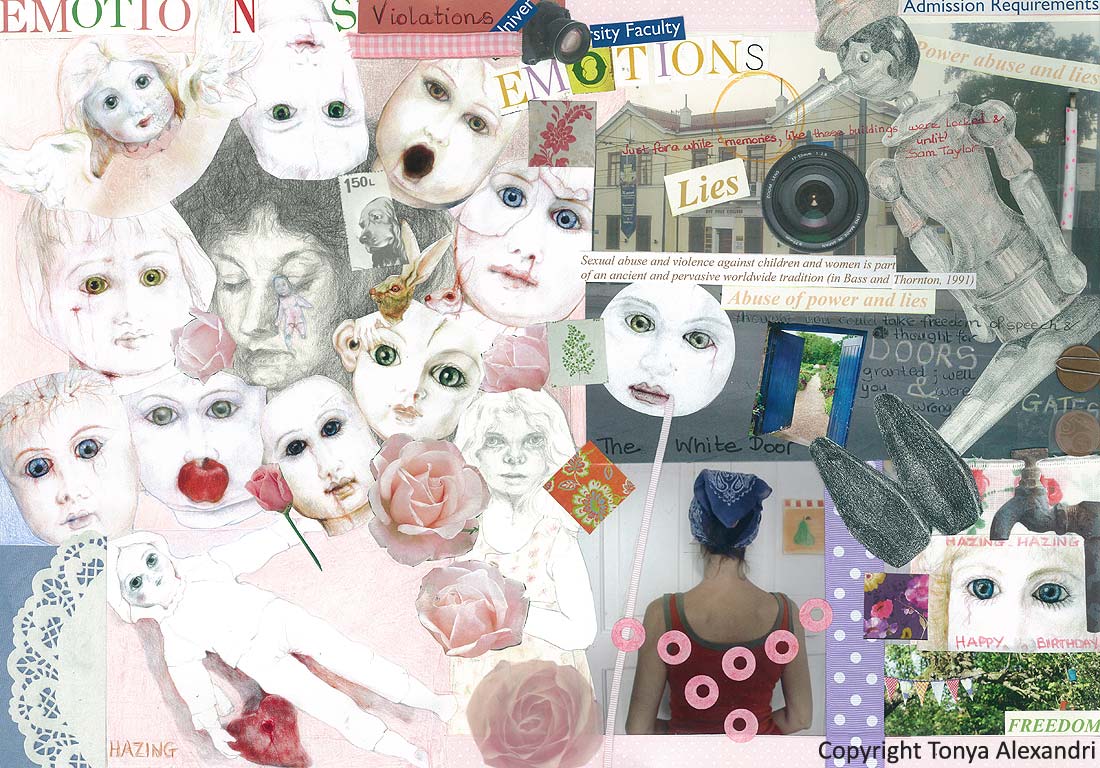 A couple of days before Xmas day of 2011 it felt like everything had been blown apart, but ironically, it eventually lead me down a different, more relevant and closer to my heart path of learning and awakening and the creation of the site that became a vessel or space where all these interests could come together again and I could slowly reclaim my voice. Anyway, after the holiday period this year, something started nagging at me to somehow pick up that thread again, which led me to buying Dr Peter Levine’s book In an Unspoken Voice. I have read the first hundred pages so far, and it is powerful. In this book he discusses the somatic experiencing approach, the physiology of trauma and post-operational traumatic stress. We are not encouraged to think of surgical experiences as traumatic. Nor are most of us aware of the need for debriefing, support and therapeutic interventions after surgery.  However, when we are held down or under anaesthesia we experience the procedure as invasive, scary, death inducing and traumatic. Surgery is a trauma, and our body remembers it even if we don’t. He also describes his working his way through a personal traumatic experience, a road accident. In one of the You Tube videos below he describes how he managed to use his somatic experiencing approach and walk himself through the process of collapse and helplessness to homeostasis and equilibrium. Apart from being so rich in valuable information the book also reads like a story and I will probably come back to it in another post. 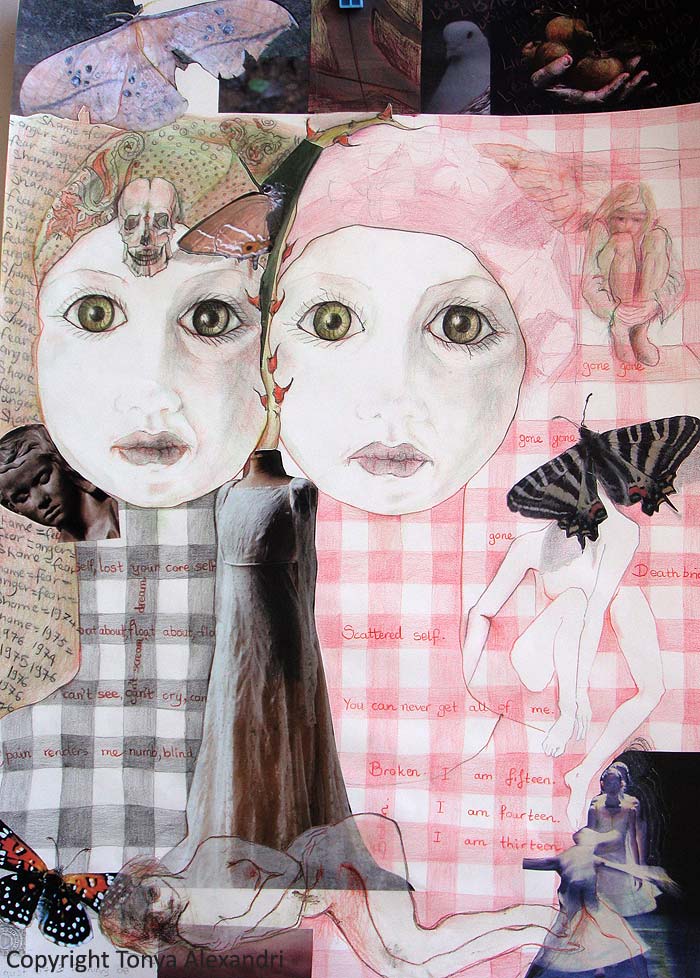 Levine writes that ‘trauma is something that also happens in the body. We become scared stiff or, alternately, we collapse, overwhelmed and defeated with helpless dread. Either way, trauma defeats life’. He notes that this state of being scared stiff has been portrayed in various great cultural mythologies because ‘myths are also maps of our essential nature, pathways that connect us to each other, to nature and to the cosmos’ (Levine).  For instance, he refers to examples from the Old Testament and the indigenous peoples throughout South America and Mesoamerica that understand the nature of fear and the essence of trauma and know how to transform it through their healing rituals. He writes ‘after colonization by the Spanish and Portuguese, the indigenous peoples borrowed their word susto to describe what happens in trauma. Susto translates graphically as “fright paralysis” and as “soul loss.” Anyone who has suffered a trauma knows, first, paralyzing fright, followed by the bereft feeling of losing your way in the world, of being severed from your very soul. When we hear the term fright paralysis, we may think of a startled deer, stunned motionless by oncoming headlights. Humans react similarly to trauma’ (Levine). He also refers to the Iliad and Odyssey epics by Homer, where ‘trauma was portrayed as ruthlessly destructive to self and families’ (Levine) and how the ancient Greeks also identified trauma as being paralyzing and physical, and that Zeus and Pan were invoked to instill terror and paralysis in the enemy during war because they had the ability to “freeze” the body and induce “panic.” He mostly discusses the Greek ancient myth of Medusa who turned all those that happened to look directly into her eyes into stone… forever frozen, because it captures the essence of trauma and the road to healing. In the myth before setting out to kill Medusa Perseus sought the wisdom of Athena, the goddess of knowledge and strategy, who advised him to never look directly at the Gorgon. Levine writes ‘Perseus used the protective shield fastened on his arm to reflect the image of Medusa. This way he was able to cut off her head without looking directly at her, and thus avoided being turned into stone. If trauma is to be transformed, we must learn not to confront it directly. If we make the mistake of confronting trauma head on, then Medusa will, true to her nature, turn us to stone……. Out of Medusa’s wound, two mythical entities emerged: Pegasus the winged horse and the one-eyed giant Chrysaor, the warrior with the golden sword. The golden sword represents penetrating truth and clarity. The horse is a symbol of the body and instinctual knowledge; the wings symbolize transcendence. Together, they suggest transformation through the “living body.” Together, these aspects form the archetypal qualities and resources that a human being must mobilize in order to heal the Medusa (fright paralysis) called trauma…. In another version of this same myth, Perseus collects a drop of blood from Medusa’s wound in two vials. The drop from one vial has the power to kill; the drop in the other vial has the power to raise the dead and restore life. What is revealed here is the dual nature of trauma: first, its destructive ability to rob victims of their capacity to live and enjoy life. The paradox of trauma is that it has both the power to destroy and the power to transform and resurrect……Trauma is a fact of life. It does not, however, have to be a life sentence. It is possible to learn from mythology, from clinical observations, from neuroscience, from embracing the “living” experiential body, and from the behavior of animals; and then, rather than brace against our instincts, embrace them’ (Peter A. Levine PhD, (2012), In an Unspoken Voice, North Atlantic Books).

1 Dr Peter Levine on the development of the Somatic Experiencing Approach and the concept of titration at: https://www.youtube.com/watch?v=AFUZHz6_0XE

3 Dr Peter Levine underscores the impact of infant attachment on our society, including the increase in childhood bullying, suicide at: https://www.youtube.com/watch?v=hvbQ9sr2Ols

4 Dr Peter Levine gives an example of the Somatic Experiencing Approach in a group setting in Greece after a big earthquake at: https://www.youtube.com/watch?v=GMq12CJLjik

5 Peter Levine talks about his first client and how a tonsillectomy with ether she had undergone when she was 4 years old, plagued her with debilitating symptoms decades later at:https://www.psychalive.org/video-dr-peter-levine-discusses-first-trauma-patient/