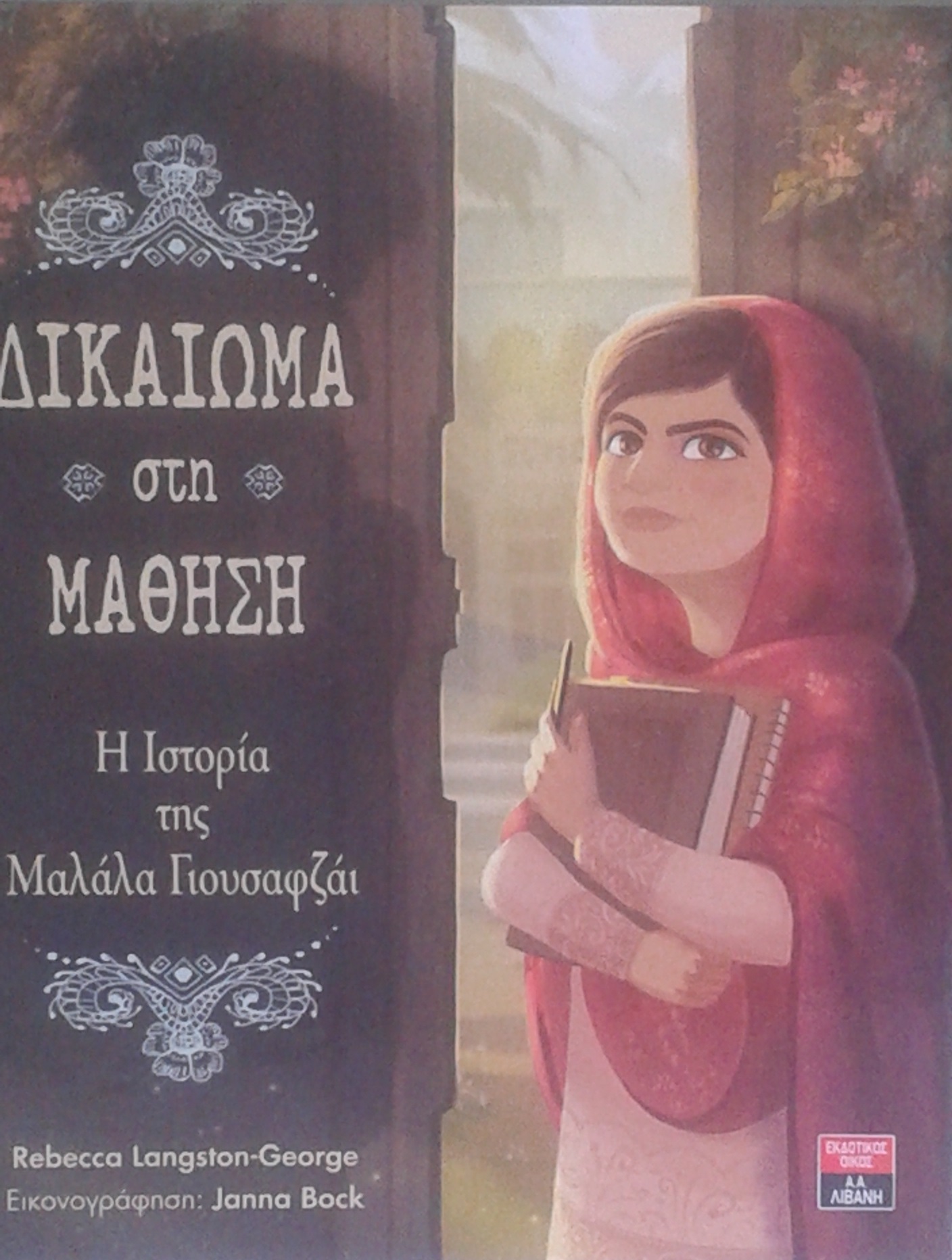 “There are two powers in the world; one is the sword and the other is the pen. There is a third power stronger than both, that of women.”

“We realize the importance of our voices only when we are silenced.”

“If people were silent nothing would change.”

Here in Greece during this lock down situation, where most products and items for sale are available only through a click-away purchase process, bookstores have opened for the public during the holidays. Browsing through the shelves of bookshops this time seemed like a treat and I could not but think about how many small pleasures we tend to take for granted. Being in Athens during this second lockdown I got the chance to visit a few bookshops and in one of their children’s department I found a book that touched me and moved me to tears, and so I decided to mention it here today. The book, written by Rebecca Langston George and illustrated by Joanna Bock, is about Malala Yousafzai’s story, who at the age of seventeen received the Noble Prize for Peace after being shot three times for standing up for the right to an education for girls.

In brief, Malala was born in 1997 in Pakistan. She developed a thirst for knowledge early on through the influence of her family, and especially, her father, who was a passionate education advocate and wanted to give her the opportunities that boys had in their culture.  He also ran a school, so school and learning were a big part of Malala’s life since her toddler years.  However, in 2007, when she was ten years old, things changed dramatically for her family and community. The Taliban began to control the Swat Valley, where she lived. By the end of 2008 they had destroyed 400 schools. Girls were banned from attending school, and cultural activities like watching television were prohibited. 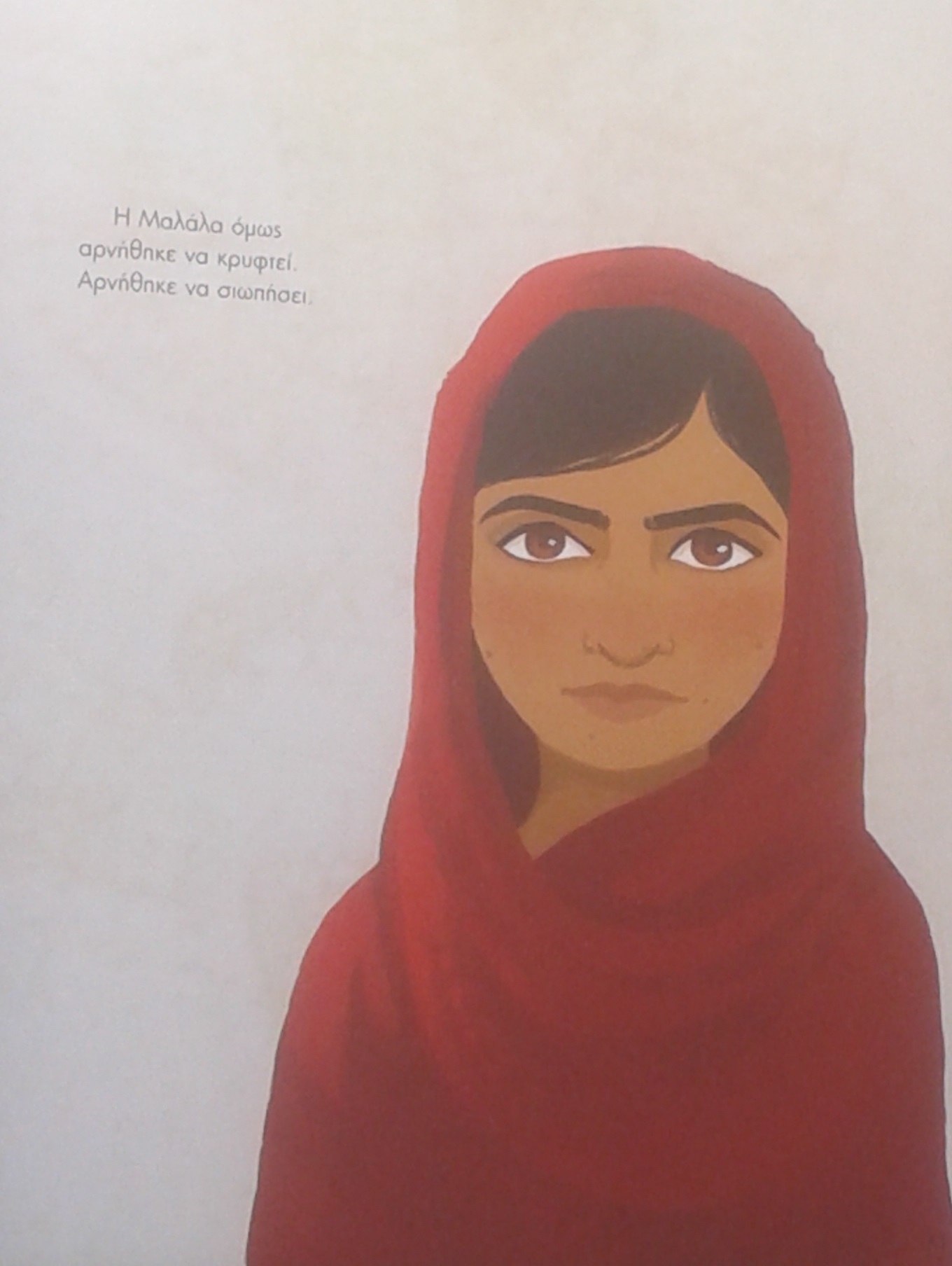 Malala remained determined to go to school believing strongly in her right to an education. Together with her father she stood up to the Taliban and in 2009 she started to blog anonymously on the Urdu language site of the BBC using the name “Gul Makai”. She was eleven years old when she wrote her first BBC diary entry titled “I am afraid,” where she described her fear of a war and of going to school. In May of 2009, Malala became an internally displaced person, after having been forced to leave her home and seek safety hundreds of miles away. On her return home, she used the media and continued her public campaign for her right to go to school, and over the course of the next three years, she and her father became known throughout Pakistan for their determination to give Pakistani girls access to a free education. Her activism resulted in a nomination for the International Children’s Peace Prize in 2011, and that same year, she was awarded Pakistan’s National Youth Peace Prize. But, not everyone was happy with her campaign to bring about change, and on October 9th in 2012, Malala was shot three times, by the Taliban, on the bus that was bringing her and her friends home from school. One of the bullets entered and exited her head and lodged in her shoulder. She was in a critical condition and four days later she was moved to an intensive care unit in Birmingham in England, where she was taken out of a medically induced coma.

Fortunately, even though she would require multiple surgeries, and repair of a facial nerve to fix the paralyzed left side of her face, she hadn’t suffered major brain damage. In March 2013 Malala began attending school in Birmingham and on July 12th on her 16th birthday, she visited New York and spoke at the United Nations. That same year she published her first book: “I Am Malala: The Girl Who Stood Up for Education and Was Shot by the Taliban”, and was awarded the Sakharov Prize for Freedom of Thought by the European Parliament. In 2014, through the Malala Fund, the organization she co-founded with her father, Malala travelled to Jordan to meet Syrian refugees, to Kenya to meet young female students, and to northern Nigeria, where she spoke out in support of the abducted girls who were kidnapped earlier that year by a terrorist group, which tries to stop girls from going to school. In October 2014, Malala, along with Indian children’s rights activist Kailash Satyarthi, was named a Nobel Peace Prize winner. At age 17, she became the youngest person to receive this prize. Malala said: “This award is not just for me. It is for those forgotten children who want education. It is for those frightened children who want peace. It is for those voiceless children who want change.”

Reading the book brought up deep compassion  for this courageous girl and concern about whether she was well and what her life was like currently. I thought about her mother and her family and what it must have been like for them to see their young loved one been shot almost to death for simply desiring to learn and express herself. It is in these moments that we realise that even though we human creatures are capable of much horror, we also have the inherent capacity for unconditional love, concern and wishing well for people we have never met. We are not only wired to hopefully care about the safety and well being of our own sons and daughters, but those of others as well. It was good to learn that Malala has grown up to become an active proponent of “education as a fundamental social and economic right”, and through the Malala Fund, she empowers girls to achieve their potential and become agents of change in their communities. And this year she has completed her Philosophy, Politics and Economics degree at Oxford.