This post is about anxiety and fear. The idea to write about fear and anxiety in today’s post came to me after listening to Rick Hanson’s weekly meditation and talk series (April 1st, 2021 at: https://www.rickhanson.net/meditation-talk-letting-go-of-fear-and-resting-in-peaceful-confidence/). He touches upon different and often compounding and intersecting reasons why we might be experiencing anxiety and suggests five different things we might do to move through it.

Fear is hard wired in us as a species in order to help us protect ourselves and others and to ultimately survive. Bruce Perry writes: “Babies are born with the core elements of the stress response already intact and centered in the lower, most primitive parts of their developing brains. When the infant’s brain gets signals from inside the body— or from her external senses— that something is not right, these register as distress. This distress can be “hunger” if she needs calories, “thirst” if she is dehydrated, or “anxiety” if she perceives external threat. When this distress is relieved, the infant feels pleasure. This is because our stress-response neurobiology is interconnected with the “pleasure/ reward” areas in the brain, and with other areas that represent pain, discomfort and anxiety. Experiences that decrease distress and enhance our survival tend to give us pleasure; experiences that increase our risk usually give us a sensation of distress” (cited in Bruce Perry and Maia Szalavitz, 2007). It is in some sense like an alarm bell, but as Rick Hanson mentions we can end up fearing of not being afraid, which can feel like living in an invisible cage even though the threats of the past might not be there today, but when we feel threatened and anxious we can sabotage our own well being. Moreover, when we feel threatened we can become threatening to others through our behaviours or acting out and through projecting our emotions on others.

When fear and anxiety are projected onto others they can become carried feelings. According to Terry Real* projective identification is a term that describes the phenomenon of carried feeling.  Because his book focuses primarily on male covert depression he mostly provides examples of the emotions of shame and anger  to explain the term carried feelings, but fear and anxiety can also be carried feelings. Real writes: “because male depression is so often a carried feeling, recovery frequently involves, or at least invokes, several generations of men…… through the mechanism of carried shame and carried feelings, the unresolved pain of previous generations operates in families like an emotional debt…..” He describes this process of projection of emotions on others in many vignettes. For instance, he writes that the partner of a covertly depressed man “may offer herself up as a scapegoat, expressing his projected vulnerabilities for him. This is a phenomenon called adult-to-adult carried feelings.”

Rick Hanson says anxiety could be viewed as either a trait or a state and over time states can culminate into traits. State anxiety is caused by circumstances, and so, decreasing the frequency of experiences of anxiety and replacing them with experiences of well being can lead to a positive impact on trait anxiety. Terry Real differentiates between states and feelings. He believes that in contrast to states, feelings are specific and anchored in the body of one’s experience. So, within this framework depression is a state, whereas, sadness and anger are feelings. Anxiety is a state, whereas, fear is a feeling. He writes: “The cure for states is feelings. As I discovered that day in the shower, unlike states, which tend to congeal, feelings will run their own course in due time.” In other words if we can let our feelings to be felt they will gradually dissipate.

Accept the emotion and focus on what is basically okay right now. Take in the bigger picture. Be open to the experience, connect to the feelings in the body and rest in a place of empowerment and basic okayness in the moment, separate the emotions from the thoughts, and nurture the self or the old part of the self that is bringing up the emotion. The fear could be about current stressors, but it could also be the implicit memory of past experiences that are being felt in the present. Rick Hanson provides an example from his own childhood, of being afraid of the dark, which is a common childhood experience. It reminded me of my own childhood fear of the dark and two children’s book by illustrators Ingrid and Dieter Schubert**, which rest on our bookshelves. One is about a little girl who is afraid of the dark because she thinks there’s a crocodile under her bed and the other is about a little boy who is afraid of goblins lurking in the dark. In both cases the adults help the children diffuse their fears through engaging with them artistically, painting them and making a crocodile out of egg cartons. To use a psychoanalytic term the children sublimate their fears and through art they diffuse the emotions and associated stories. When my son was young our book reading experiences often evolved into art projects. Ingrid and Dieter Schubert’s illustrations had inspired him to make a similar crocodile out of egg cartons and other scrap material and a big crayon drawing. Part of this drawing has survived intact with the exception of some colours fading and so I’m posting it here today.

Connect with the heart, which could include feeling gratitude and recognising support that is there, touching the heart area and connecting to self compassion, tapping into our loving feelings for ourselves, another or others and practising wishing others well, and finally, tapping into our courage and strengths.  Speaking of tapping we can also use Emotional Freedom Technique (tapping) to process emotions, thoughts or situations that overwhelm us. Connecting with our heart helps us come home to ourself and find a place to stand both within and without.

Take effective action, which could be making a plan or a decision, creating a list of small activities to engage with, re–appraising threats and reaching out for help. Taking action is important because feeling trapped in helpless anxiety exacerbates any situation. Being agentic is empowering and it mobilizes us. Meanwhile, it is wise to recognize the limits of our influence both in relation to personal and societal / systemic circumstances.

Surrender to whatever causes our anxiety whether that is frailty as we age or become sick, the ending of relationships, death of a loved one and losses of any kind and magnitude, fear of flying or the universal and often unarticulated or unconscious fear of dying. Also, surrender to the limits of what we can do or change. This is even more challenging because it creates a sense of helplessness and being out of control, but resting in a place of surrender can bring us in touch with our fears and resistance and in doing so help us release emotions. During the talk Rick Hanson mentions the Rorschach test, which is a tool that involves recording people’s perceptions of inkblots and then analyzing the data using interpretation, algorithms, or both. This reference brought up memories of a psychometric course where the professor had brought in a Rorschach type test for us to explore and maybe get an idea of how we could go about using a projective test. The images were not abstract inkblots and it might have been the Thematic Apperception Test or something of that sort. What was surprising was that several colleagues came up with themes to do with existential fears and fear of death, in particular, even though the pictures they were exploring were not all obviously linked to death or old age, which might mean that this type of anxiety often lurks undetected and we may not be aware of it. So getting in touch with it and accepting it can dissipate underlying anxiety.

Finally, some of us may also be temperamentally tilted towards anxiety. Anxiety can also be the result of lifestyle choices, physical ailments or imbalances in the body. Some people are less extroverted and might experience social anxiety. One way to approach this type of stress could be by being more of our authentic self during interactions with others and by holding others and ourself in an unconditional positive regard. Another idea discussed on the podcast is that sometimes we need to finally get in touch with our being fed up with people who want to make us worry constantly and people or forces that are invested in controlling and intimidating us intentionally.

*Terry Real: I Don’t Want to Talk About It: Overcoming the Secret Legacy of Male Depression (1999)

**Ingrid and Dieter Schubert are married and they work together to produce their lovely books. Their first title: There’s a Crocodile Under My Bed! was an immediate success. In 1987 they were awarded the Golden Paintbrush for Where’s My Monkey? 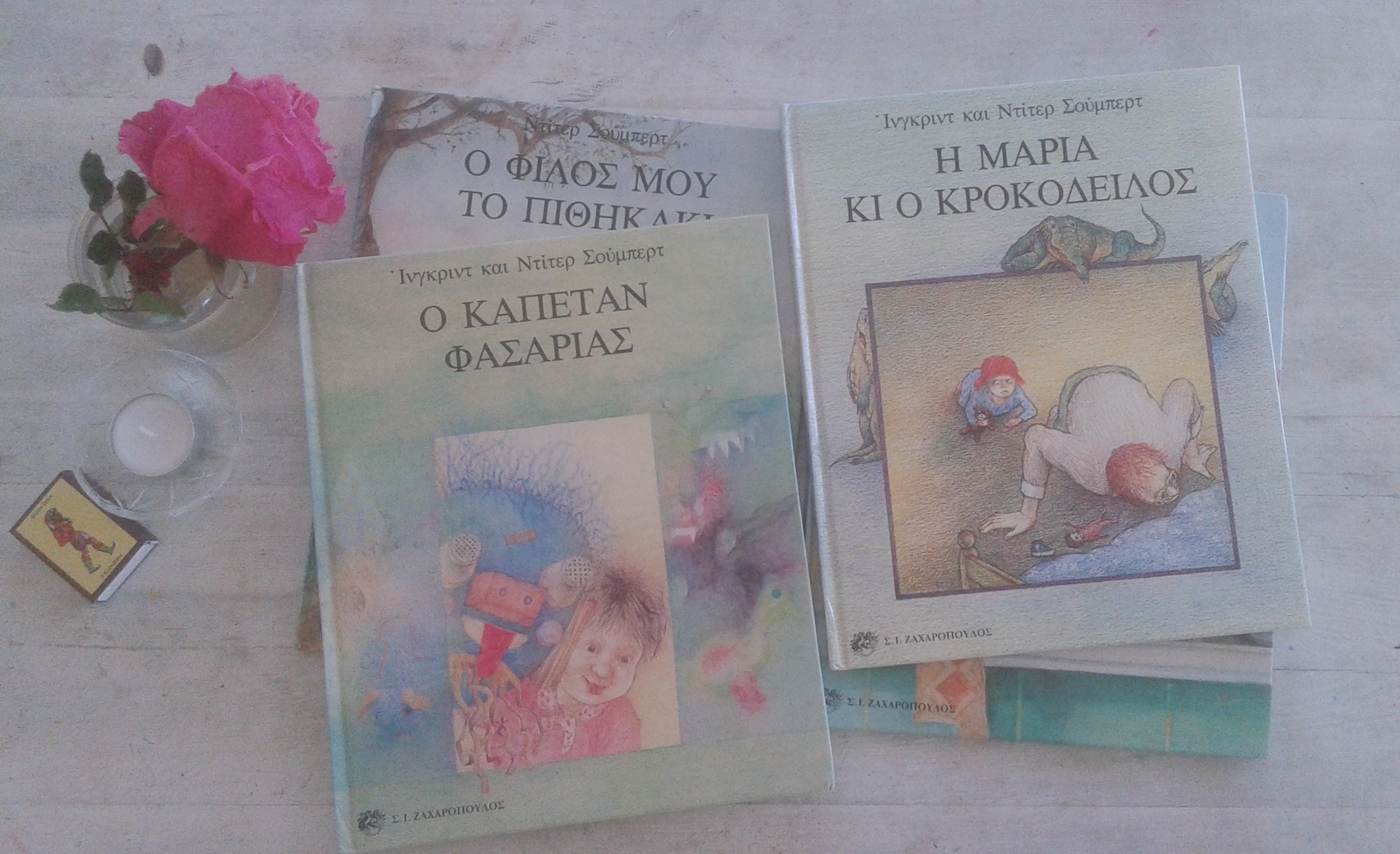