‘Anything can become an inspiration to draw or create – external stimuli or internal experience. It may be an emotional or sensational experience, a memory, a movie scene, a page from a book, dream, a photo, an object, a face, something or someone outside my window….. The stimulus that triggers the desire or urge to narrate through images is then transformed through the artistic process into something new or different. It becomes a visual narrative with multiple underlying stories. My understanding and interpretations of whatever I have produced may be totally different from what the viewer perceives and understands and each image contains emotions, secrets and life experiences only visible to me. The first drawing below was inspired by a photo of a child that for various reasons appealed to me. Specifically, I came across the photo that inspired the following drawing while leafing through a book of photos I was given as a gift by an old acquaintance….. The book contained photographs taken by Andreas Empericos, a Greek poet, psychoanalyst and photographer. It was one of a series of photos he had taken of his son, Leonidas, between the years 1958 and 1971’.

The same collection of photos inspired the second drawing, which I have used in the series of artworks and posters I created in 2012. 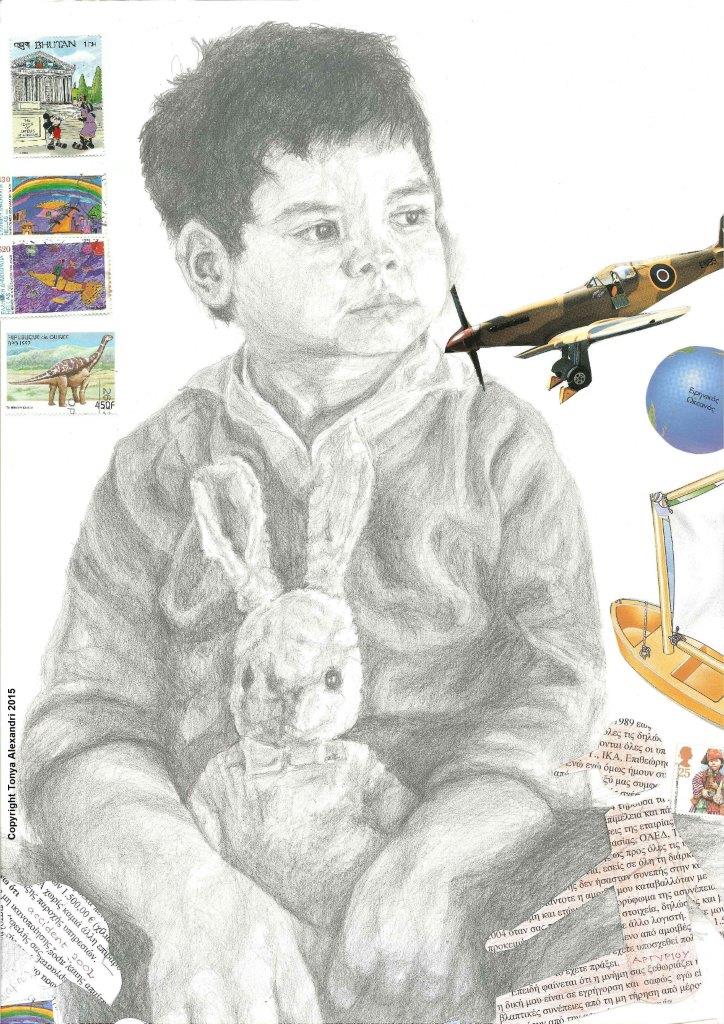 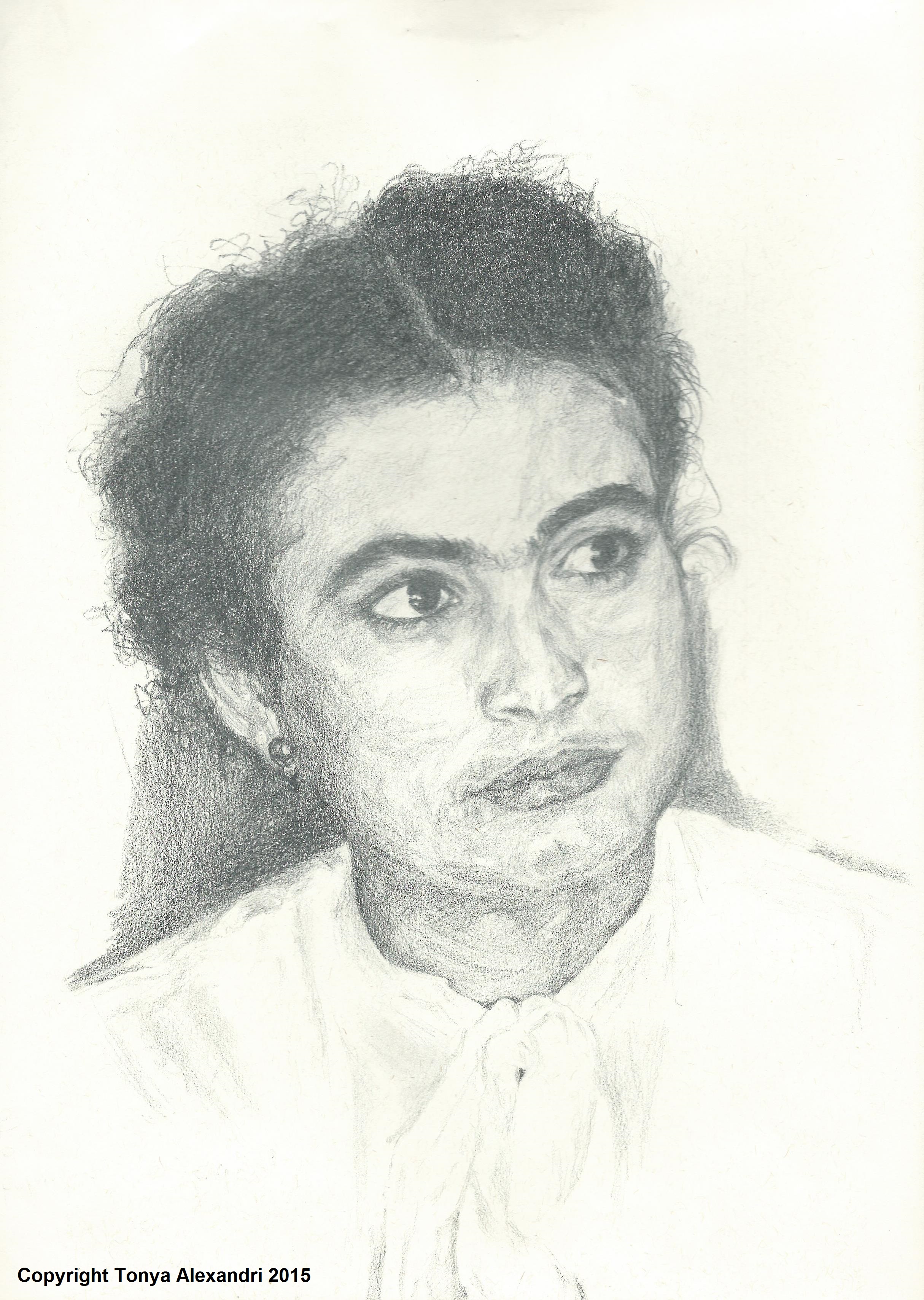 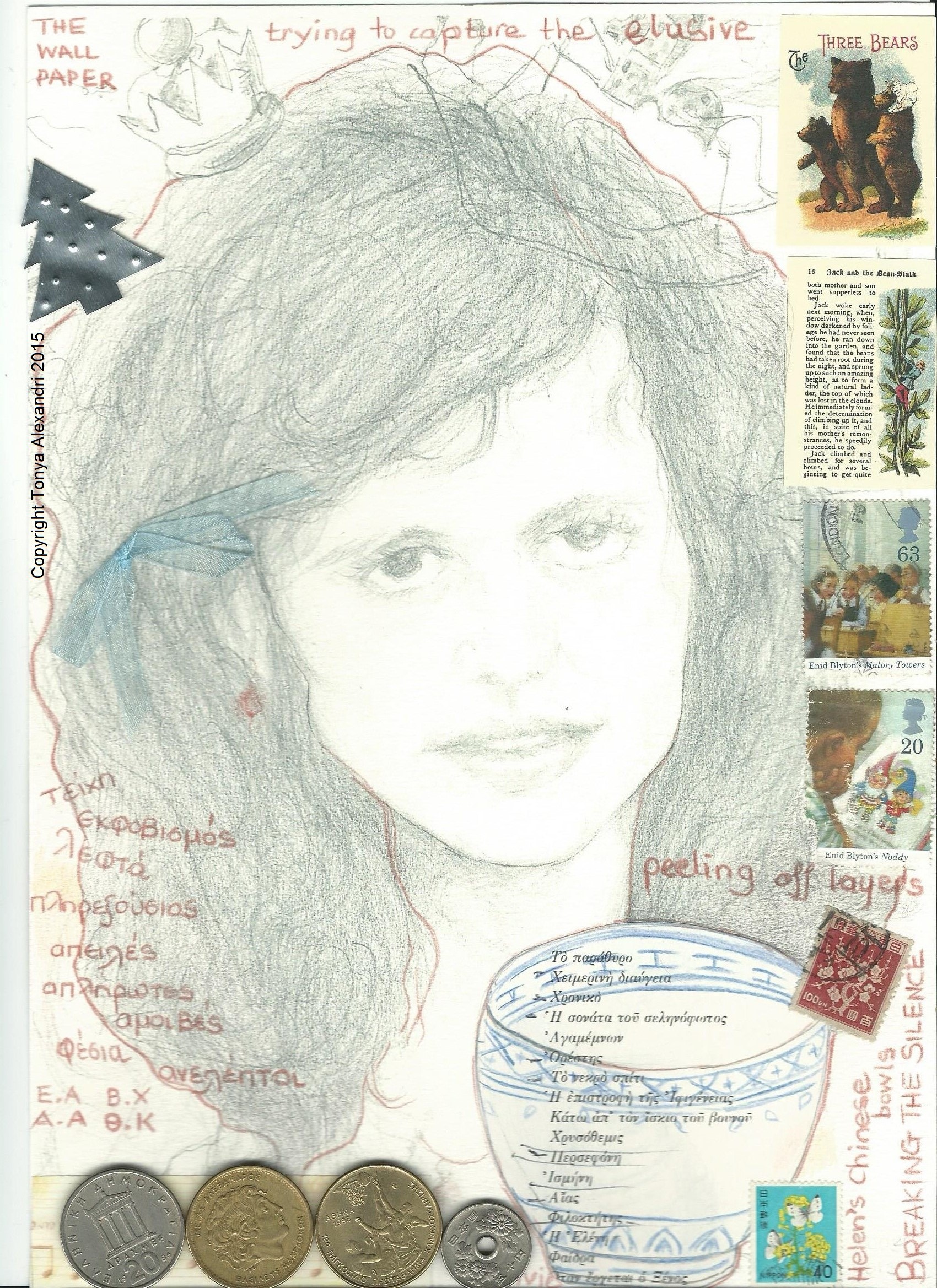 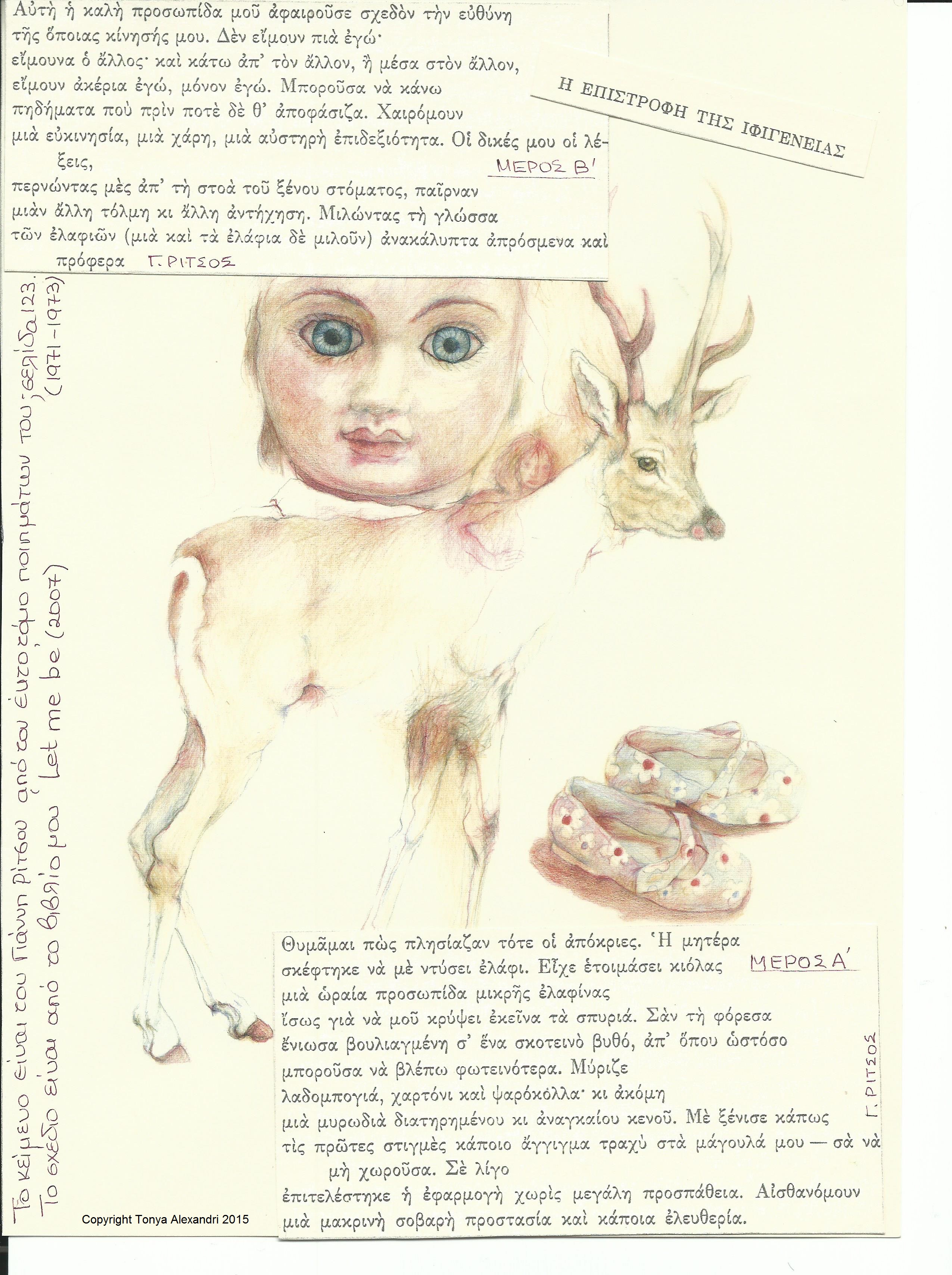 In mythology, Ariadne was the daughter of King Minos of Crete and his wife Pasiphae. Ariadne fell in love with the courageous and noble hero from Athens, Theseus, who had been sent to Crete to kill the Minotaur. Theseus was one of a group of youths and maidens who were to be fed to the Minotaur, who was half man, half bull. According to the myth, it was actually Ariadne who helped Theseus escape the labyrinth, which was the Minotaur’s lair, by supplying the hero with a ball of thread so that he could navigate the twisting passages of the maze. The king of Crete had asked Daedalus to build the particular labyrinth and it was said that anyone who entered it was doomed to be devoured by the Minotaur because once inside, one would go endlessly along its paths without ever finding the way out. Theseus was able to eventually find and kill the Minotaur and then escape from the maze by rewinding the thread Ariadne had given him. She then fled her homeland with him when he sailed back to Athens. There are many different versions of the rest of Ariadne’s story. In one version, she was abandoned by Theseus on the island of Naxos while she was sleeping on the shore. Interestingly, Theseus ends up marrying Ariadne’s younger sister, Phaedra, who then falls in love with his son, Hippolytus, and ends up committing suicide when she is rejected, but this is the theme of another Greek myth, which inspired a play composed by the Greek dramatist and poet Euripides. Another version suggests that while she was lamenting her fate, the god Dionysus appeared and rescued her. The couple then married and had three sons. In another version of this myth, after arriving at Naxos, Ariadne was killed by Artemis (the Greek goddess of hunting and other things). Another story, which is more favourable to Theseus, suggests that Ariadne was seasick, and he left her on the shore to recover while he returned to the ship to do repair work, but then a violent wind carried him out to sea. On his return he found that Ariadne had died. In any case, Ariadne was worshipped in many places and her influence spread from Crete to the Cycladic islands, Chios, Lemnos, Cyprus, Athens, and especially, Argos in the Peloponnese.

This powerful and complex myth of the Greek heroine Ariadne has been a favourite for artists and poets across time and her legend has inspired many interpretations by poets and has influenced many painters. Poets, painters, playwrights and composers, like Ovid, Strauss, Eliot, Titian and others, have all been fascinated by the story of Ariadne and each has adapted it. Especially, renaissance art drew heavily upon classical mythological figures, because they believed that the myths contained wisdom and many underlying messages. In ancient Greece, as elsewhere, myths and tales about gods and heroes did not only serve the purpose of entertainment, but were part of the religion, and like all myths and religious stories they defined the culture and values of the people and reflected society. Myths also helped people deal with their fears and the things they could not explain. The heroes and gods in Greek mythology are recognizably human and their stories tell of people who are not necessarily good or noble. The characters can be excessively selfish, vengeful or cruel. Those that disobey the gods may experience tragic consequences and others are mere pawns in the hands of these capricious gods, and their worth is usually measured in how they respond to injustices and adversities. Many myths contain an archetypal hero or heroine, who is usually born under unusual circumstances, often leaves family or birth place and experiences traumatic events, which at some point force him or her to embark on a quest of self exploration and knowing. Finally, after many battles and suffering there is usually atonement or discovery of family and restitution, like in Theseus’ story. This journey may always be hard, but the traveller is transformed in the course of this voyage.

The complex myth of Ariadne is powerful because it contains many themes and a lot of creative metaphors and interpretations, and moreover, it seems timeless. The Minotaur, who is the master of the labyrinth, is one character of this myth. One interpretation of this type of story is that the monster must be slain, in order to allow the hero to discover the treasure or to reveal buried and guarded secrets. The Minotaur may represent whatever prevents us from thriving and being free. It could symbolize our deepest fears or negative internalized messages, which keep us locked from our potential and alienated from our self. The maze may symbolize our journey of self exploration and quest for the truth and it could also represent our inner experience and workings of the mind. And like in real life we often need to find our way through a labyrinth in order to heal or liberate our self or our creativity and get to know our true self. The Ancient Greeks valued ‘self-knowledge’ (αυτογνωσία). Socrates was the one who said that ‘the unexamined life is not worth living’ and the famous phrase ‘know thyself’. He also said ‘I am not an Athenian or a Greek, but a citizen of the world’ something that is worth remembering in contemporary Greece. Anyway, in life we may take wrong turns, get lost or, hit walls (not necessarily brick ones), we may be manipulated and disorientated, we may lose sight of what is important or the undermining dynamics taking place around us, before we eventually find our creative treasure at the core of our self that will allow us to achieve higher levels of knowing and clarity. The thread could be viewed as a symbol of inspiration, a guiding light or the wisdom that helps us navigate this voyage. Sometimes we may look in the wrong places, when all we need is that piece of string to begin our quest, which of course is not easy to find in the first place, and it is always good to have loved ones who can stand by us along this less travelled road. Also, once we find our thread it requires courage and determination to embark on the journey, and as we all travel through figurative and literal labyrinths in our lives, we may often lose sight of the thread, which connects us to our true self and our strengths and to those we truly love and are connected to. The thread eventually helps us restore, reunite and rewrite our life narrative. The heroine of this story uses Theseus’ actions to leave her homeland, Crete, behind and to free herself and find her place in life in another land. She is clever enough to come up with a way for Theseus to find his way out of the labyrinth. In fact, her ball of thread could be viewed as a metaphor for the cleverness and intuition which guides her in finding a solution to the problem of escaping the labyrinth. It could be suggested that she is really the one who defeats the labyrinth. Moreover, in the myth Ariadne misses the boat, and this abandonment initially devastates her, but it also changes her destiny for the best. Finally, Theseus’ story is also rich in symbolism, messages and information about what the Ancient Greeks valued and what their society was like, and it could be the content of a future post.

The pencil drawings below are some of the many I have sketched and drawn across time. What these drawings all have in common seems to be that they all depict someone or something that has influenced me in one way or another, like snapshots of experience. It may be pet, a photo, an artwork, a book, a song, a poem, a musician, a poet or an artist. It may be an image from the many stories I’ve been told or a scene from the many films I have watched in various contexts…. I know that films by the Swedish director, Ingmar Bergman, have had an impact on me and scenes and symbolism from Bernarndo Bertolucci’s epic yet ‘raw realistic’ film, 1900, has surfaced in my artwork, to mention but a few. These drawings, some sketched on rough wrapping paper or any kind of paper that was available in the moment also seem to represent life periods in terms of jobs I did, places I lived, music I listened to, books I read, people that had some positive or negative impact on me, and people I have loved. Our life is made up of every little thing, no matter how small or insignificant, it may seem at the time. Every routine or action, every achievement, hobby, interest and like, every small talent and capacity, every loss, betrayal, trauma and injustice suffered, every battle fought, won and lost, every dream realised and cancelled, every place visited and every border crossed, every wall torn down and every wall crashed upon, every person I have connected to in some way or other and every right and wrong decision. In the end they are all part of the thread that connects me to myself and others across time and they are all part of my life story.

In these more recent pages of this website I have been posting pencil and ink drawings as part of this ongoing online art project. 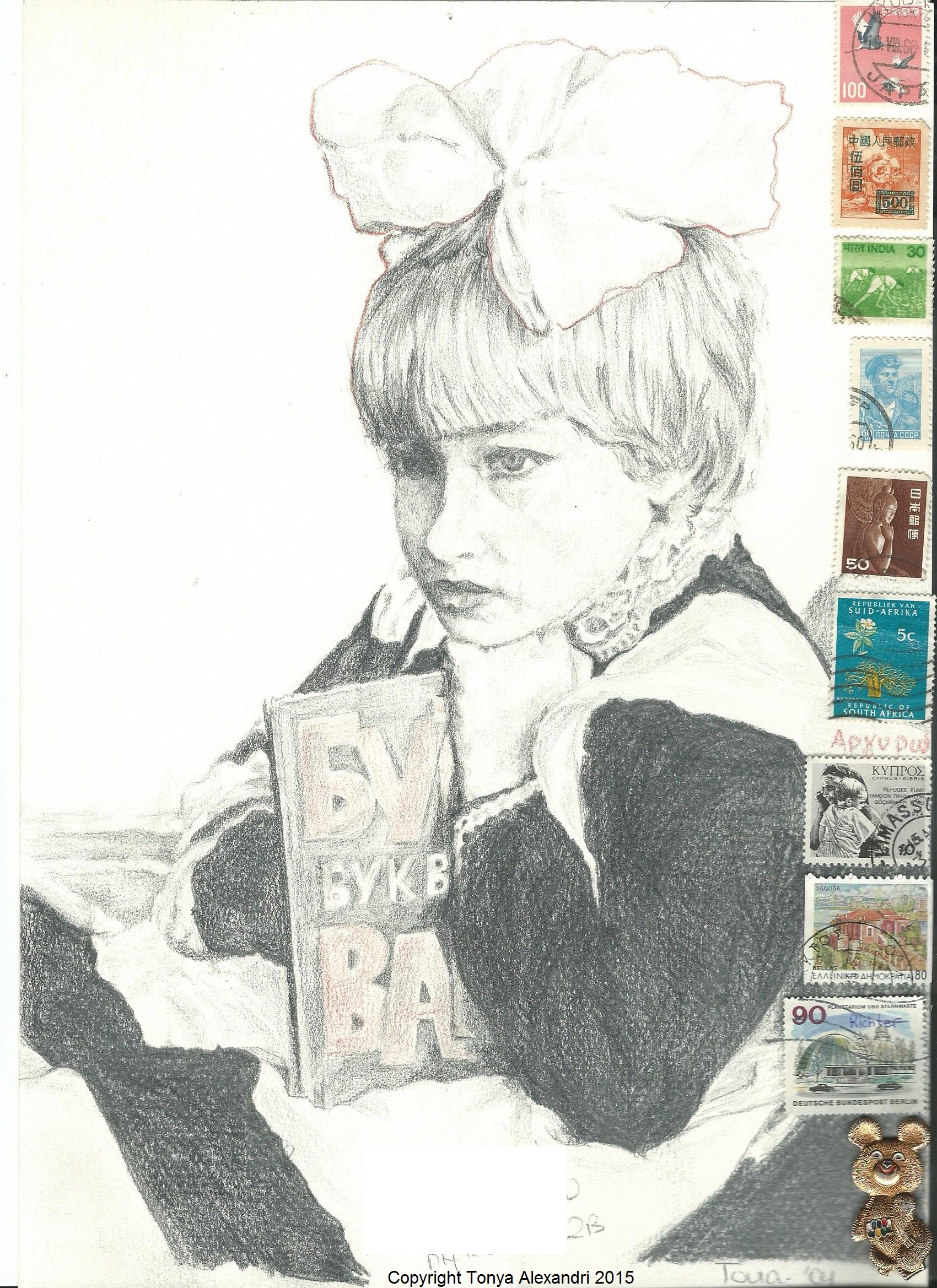 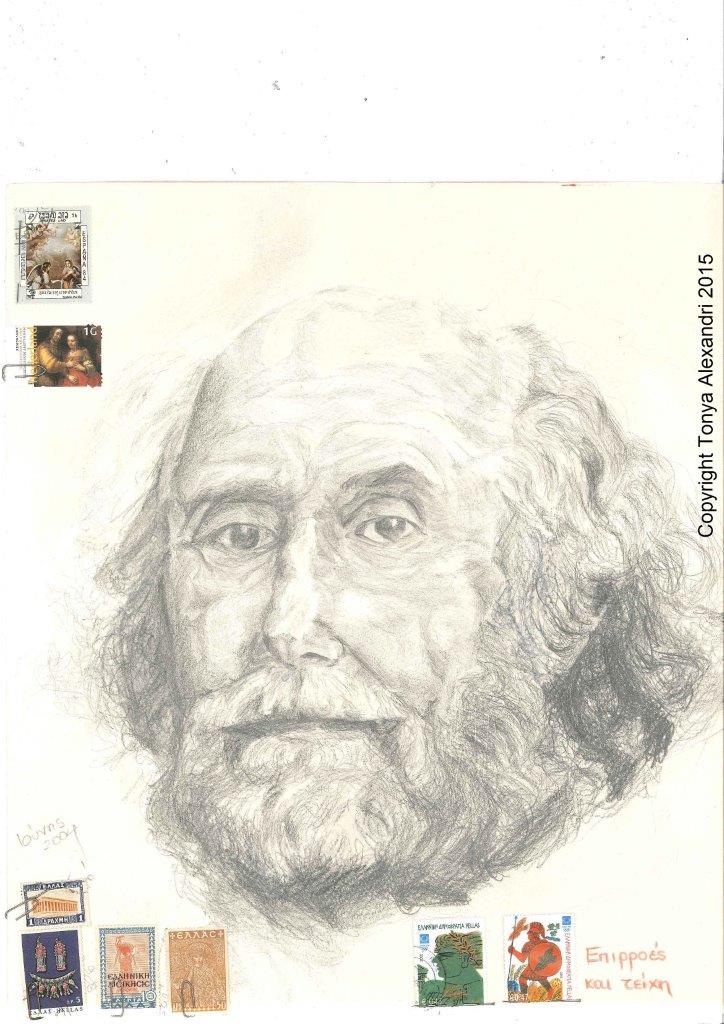