Animal symbols and tales of avarice, injustice and discrimination

Animal symbols have been used extensively in expressive arts, myths, fables and children’s stories because they convey so much and create vivid images and rich associations. Exercises that involve drawing animals can be used in (psycho) therapy with children, family therapy or art therapy and can facilitate the healing process and deeper understanding. Specifically, the octopus image below is part of a series of quick pen drawings I made in 2005 and used as an art journal page. Additionally, I think that I am not alone in finding the octopus a powerful symbol to express sensations and overwhelming emotions of constriction. However, for me it is also an image that can powerfully depict dynamics and politics of tangible injustices and outright violations, especially, if prolonged trauma and violations have occurred across time. Of course, one’s interpretation of images, metaphors and symbols are all context dependent and each individual’s meaning making is unique and the result of one’s life experience and social context. The following paragraph could be the accompanying text to the drawing of the octopus below.

The octopus encages its victim, like an ever-seeing, ever-present creature or structure of constant interferences and losses. And although it may often be elusive and slippery like the texture of a live, wet octopus caught in the sea, it still has the potency to rap itself around its chosen object like a constrictor – a firm and elusive grip at the same time. Then as the octopus grows in size and volume and as its life span increases it takes up more and more space, threatening to totally engulf its victim. Yet often the victim, no matter how oblivious it may be to certain aspects of its suffering, struggles frantically to escape the grip, to overcome the battering and losses, to set boundaries, to understand more, fight for justice, and eventually move on. The tentacles could represent areas and aspects of violations and losses, but they may simultaneously represent the guards of the original driving force. The image of the octopus, its head and tentacles, respectively, could also represent past and current victimization and the hidden dynamics. However, an image of an octopus can conjure up a totally different picture and produce completely different associations, at least for those familiar with Greek cuisine and a sense of humour, which is always welcome and helpful. In Greece octopus is a popular chewy delicacy, served in almost every seaside tavern. It is usually prepared by first beating the octopus and then chopping it up into small pieces before thoroughly washing, in order to remove the sand from its tentacles. Only then is it ready to cook. It is often sprinkled with vinegar and accompanied with ouzo, which is a drink similar to the Italian grappa.

To sum up, survivors’ artwork may often contain common symbols and their meaning making of certain images may also be similar. I do discuss this elsewhere in the site. Moreover, trauma survivors, across contexts, may tend to use similar images and metaphors to express pain or other experiences and we may at times all use similar metaphors or symbols to describe pain, loss, grief, anxiety, anger or fear. Theodor Kallifatides depicts his grief vividly in the following short extract of his book Η Όλγα της Αγάπης. ‘I knew exactly how big my sadness (grief) was, but I couldn’t do anything about it. My sadness was not a cocoon that would reveal a butterfly. It was me hiding in my grief like a little boat in a bottle’. In my book Let me be I too have depicted an aspect of me encased in a bottle; however, not to express grief and sadness only, but much more. The image of me encased in a bottle initially surfaced in my mind, spontaneously, as I was processing experience, sensations and emotions. It is important for those doing the arduous work of re-examining the past and dealing with trauma and violations to re-evaluate and re-processes material – art or any other form and product of expression – so that deeper understanding may take place as our meaning making often changes as time goes by. 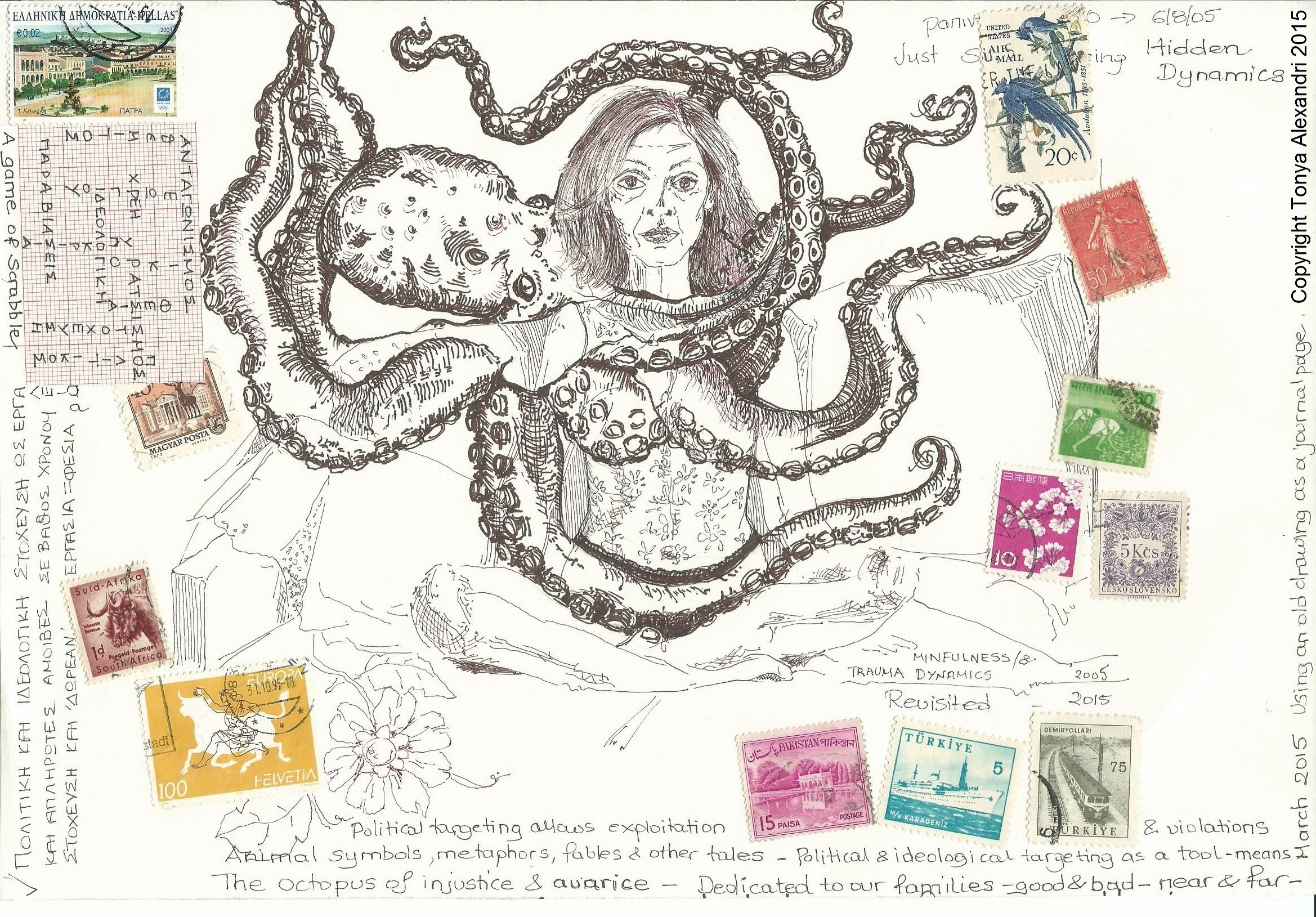 Politics and dynamics of injustices and law violations 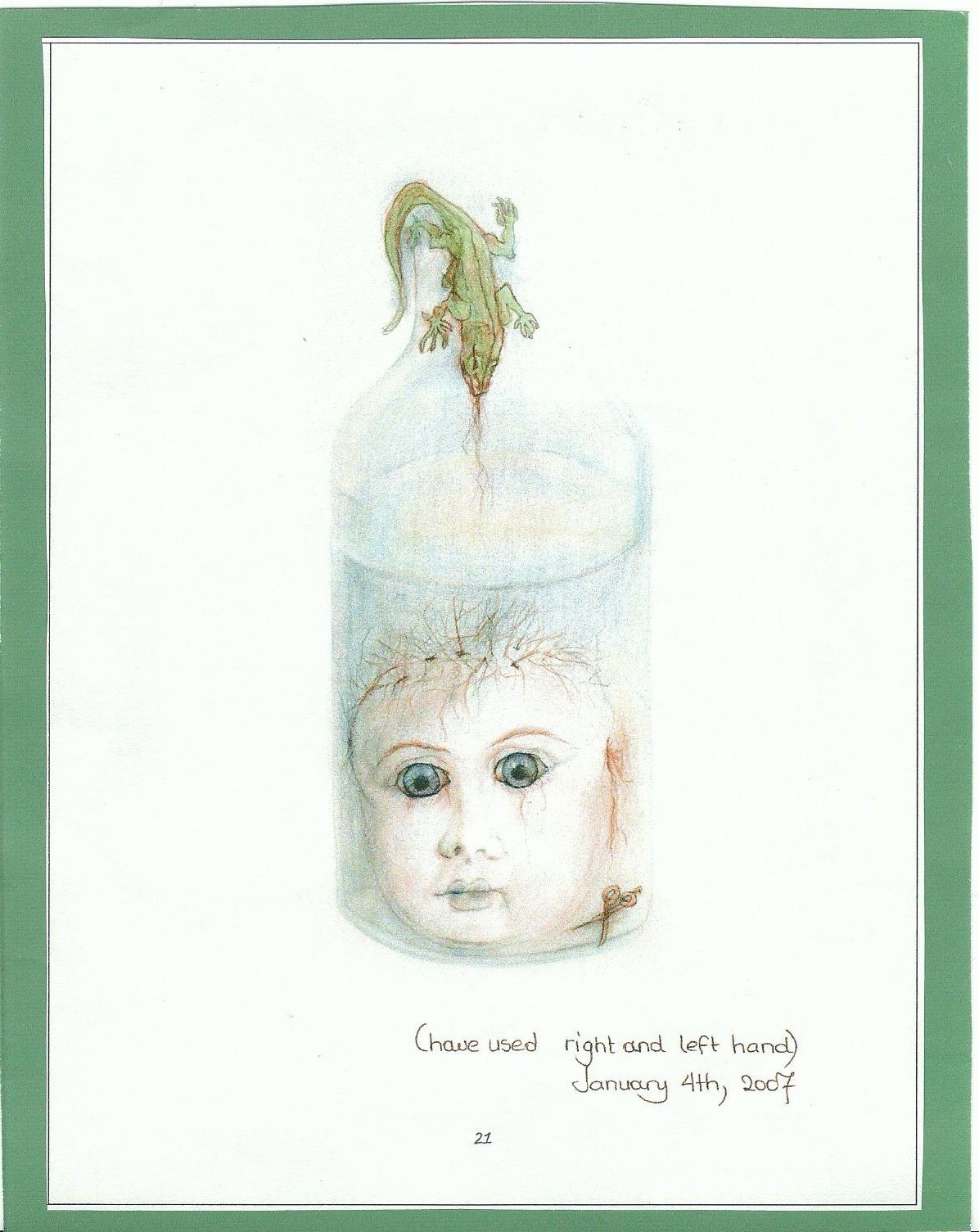 A  Frogs, lies and violation of rights 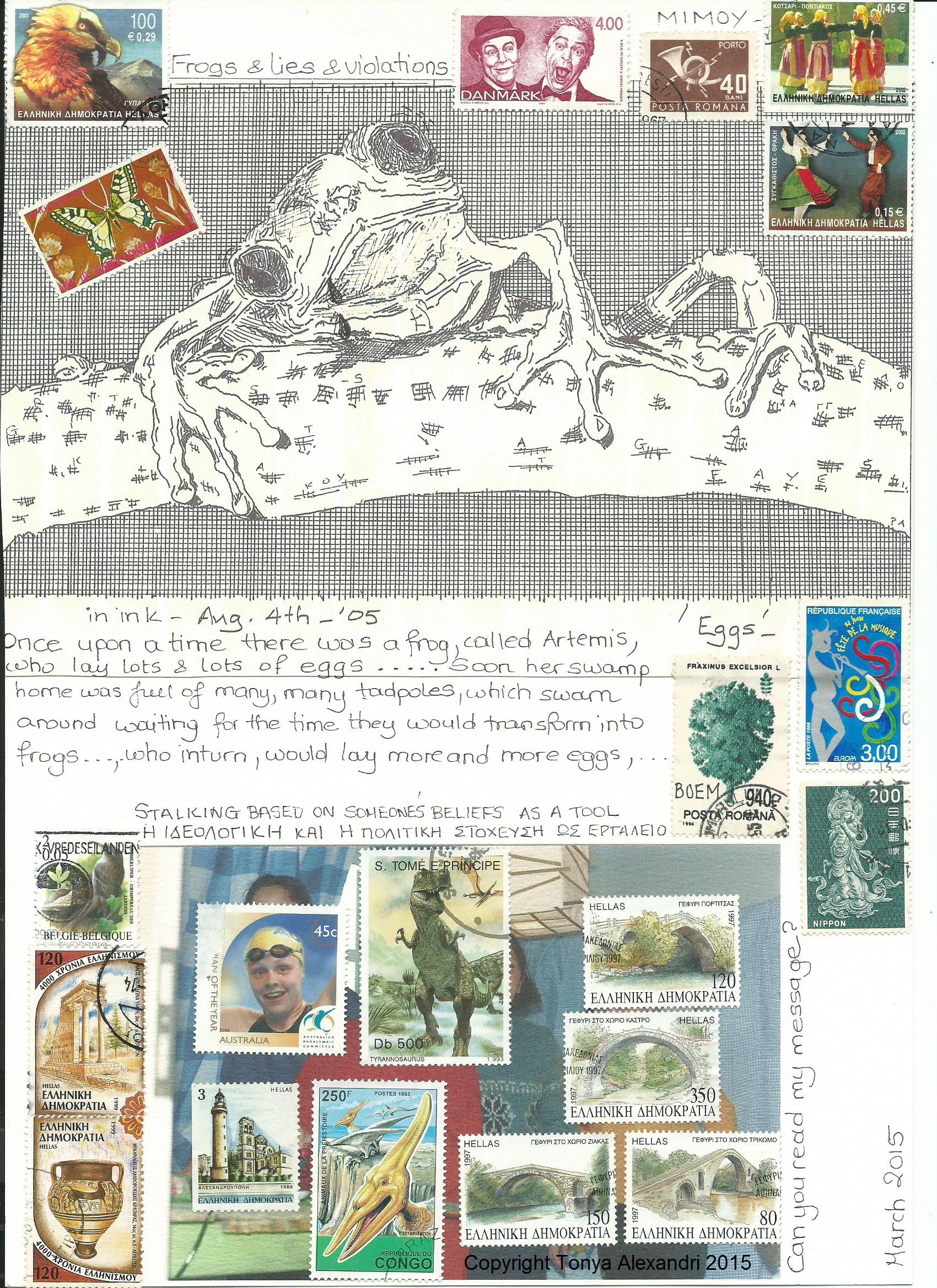 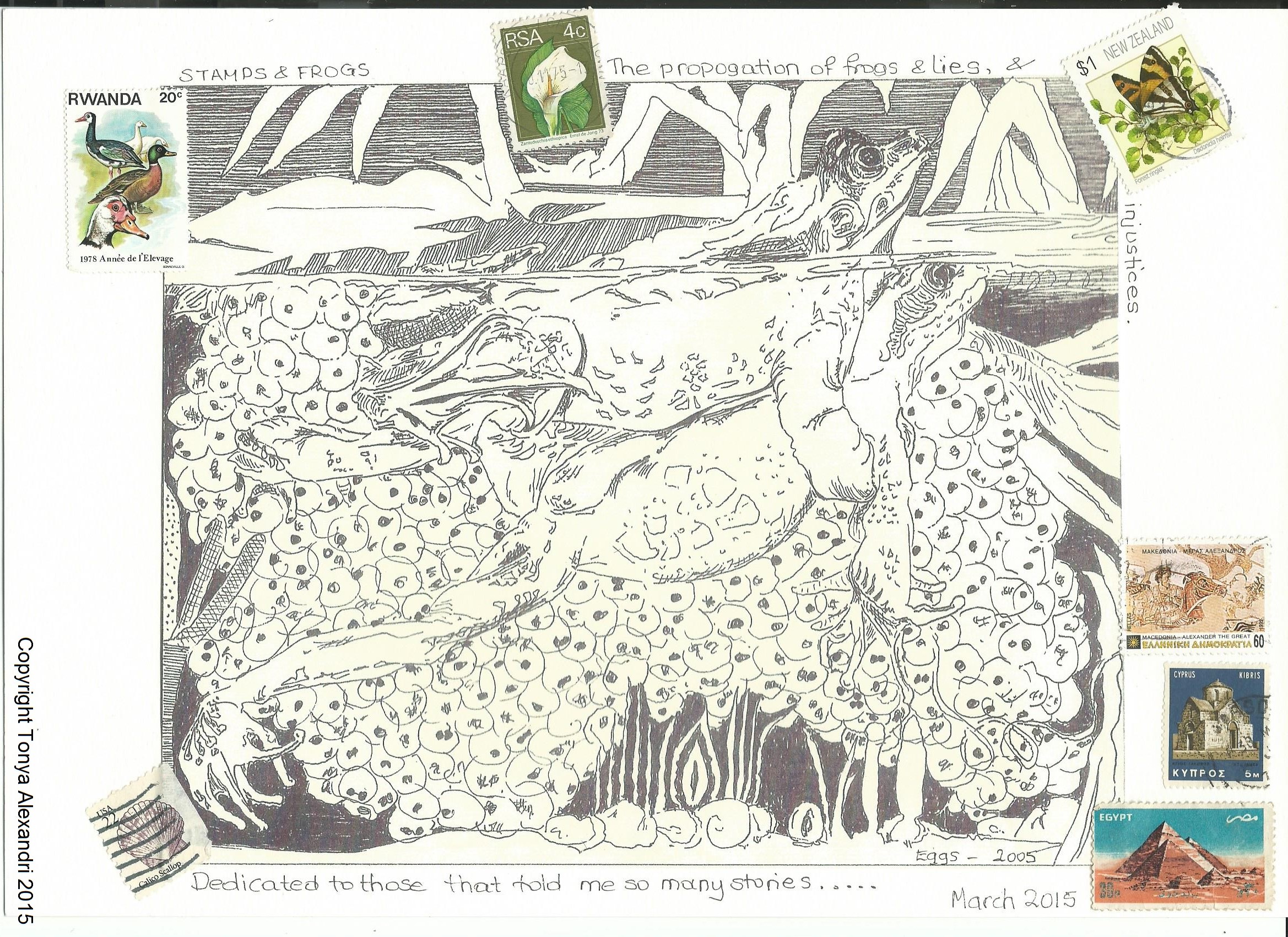 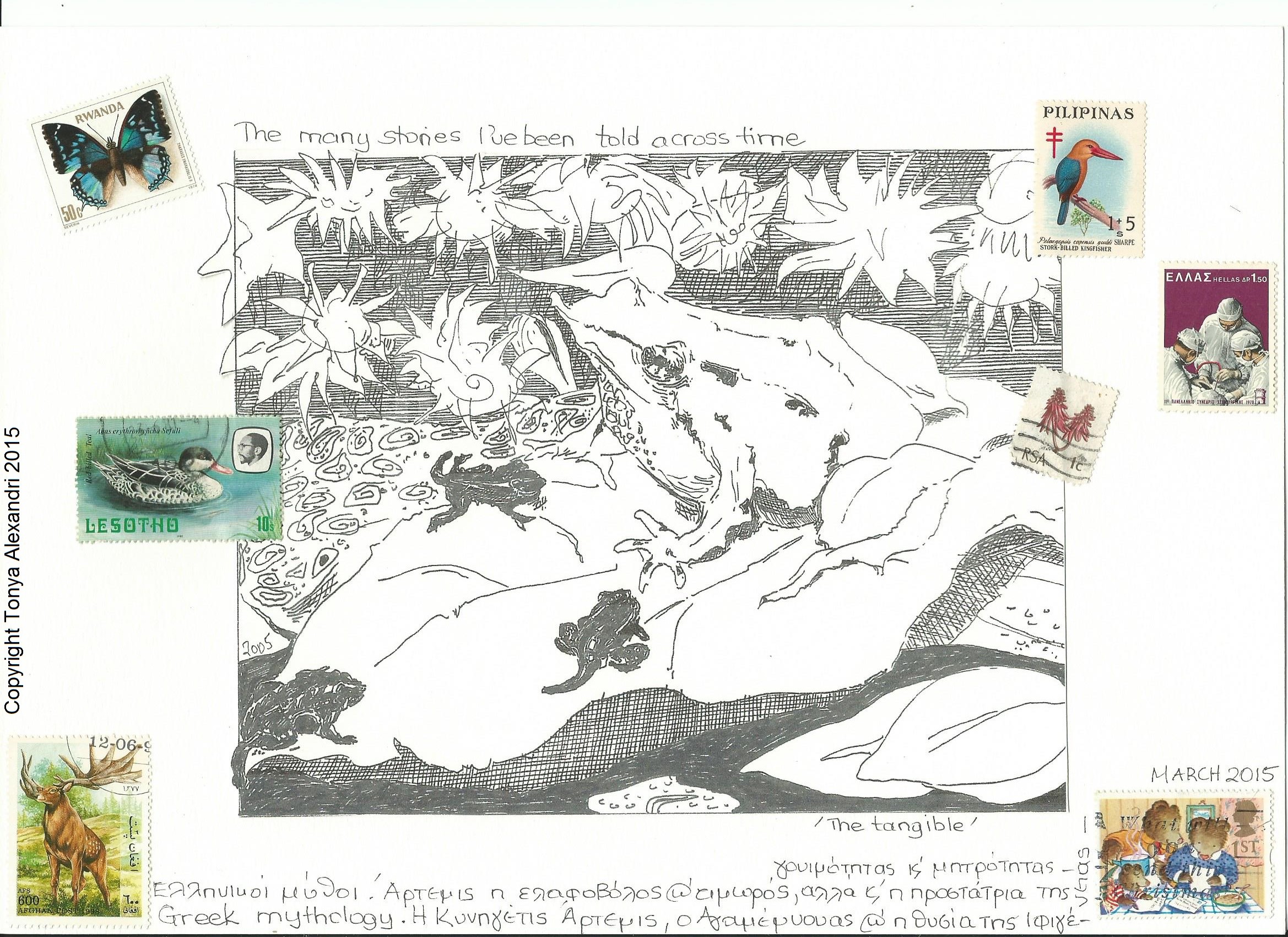 D  Greek myths and a collection of stamps

Fortunately, art, writing and symbols provide means to express experience and narrate stories, and additionally, for survivors of trauma and injustices, these means additionally allow them to set boundaries, increase safety, and finally, restore and reclaim.

When I settled on a small island, which was to become my home for many years, I was told myths and stories about Greek ancient gods, whom I must confess, could be mighty misogynists, excessively cruel, malicious, vengeful, and murderous, at times and their philosophy was definitely not ‘live and let live’. On the contrary, they abused power more often than not and enjoyed interfering with other people’s lives and destiny. I actually remember when I first arrived I was given a book (by Asimina – a woman who initially befriended me) on Greek mythology as a gift, in English, so that I could better assimilate the myths and messages, since I was not a local and was also quite ignorant concerning Greek mythology, having received my early education in another country.

One such myth that very often comes to mind is that of Artemis, the daughter of Zeus and Leto, and the twin sister of Apollo. Artemis was the goddess of the wilderness, hunting and wild animals, fertility and childbirth and was armed with a bow and arrows. She was also often depicted with the crescent of the moon above her forehead. Her main vocation was to roam mountain forests and uncultivated land with her nymphs hunting down animals and mortals on occasion. Her sacred animal was the deer, which she both protected and hunted down. She was definitely a goddess of many contradictions, for she both protected and saw to the well-being, safety and reproduction of animals and hunted them. Similarly, she protected infants and women in child labour, but it was also said that her arrows brought them sudden death. Together with her brother she killed all of Niobe’s (a mortal) children. Like her brother Apollo she healed, while she also spread serious diseases, such as, leprosy. Artemis was above all very protective of her purity and gave grave punishment to anyone who attempted to dishonour her or her nymphs. For instance, while Actaeon was out hunting, he accidentally saw Artemis and her nymphs bathing naked in a pool. Incensed by this, she transformed him into a stag, and furthermore, set his own hounds upon him, which killed him unaware that the stag was their master. Artemis was very possessive and vengeful and she would show her wrath to anyone that disobeyed her laws and wishes. Even the great hero, Agamemnon, came upon the wrath of Artemis, when he killed a stag in her grove. Artemis punished him by becalming the sea while he was sailing towards Troy. In order to bring back the winds, she asked him to sacrifice his daughter, Iphigenia. Some versions of this myth say that he sacrificed Iphigenia; others suggest that Artemis exchanged a deer in her place, and took Iphigenia to the land of the Tauri (the Crimea) as a priestess. Another myth says that one day Hercules’s uncle asked him if he were ready for his third feat. Specifically, he asked him to bring him Artemis’ sacred deer alive. This deer ran as fast as the wind, had golden antlers and was believed to have the ability to lure people far into a strange land, from which they could not return. Artemis was similarly harsh with the nymphs that disobeyed her. She turned Callisto into a bear and then killed her with her arrow because she had allowed Zeus to seduce her and had given birth to his child. Finally, Artemis was worshiped in most Greek cities as a secondary goddess, but to the Greeks in Asia Minor (modern day Turkey) she was a prominent deity and was depicted as a fertility goddess, whereas, in mainland Greece she is mostly depicted as a huntress.

A. Another brick in the wall….. 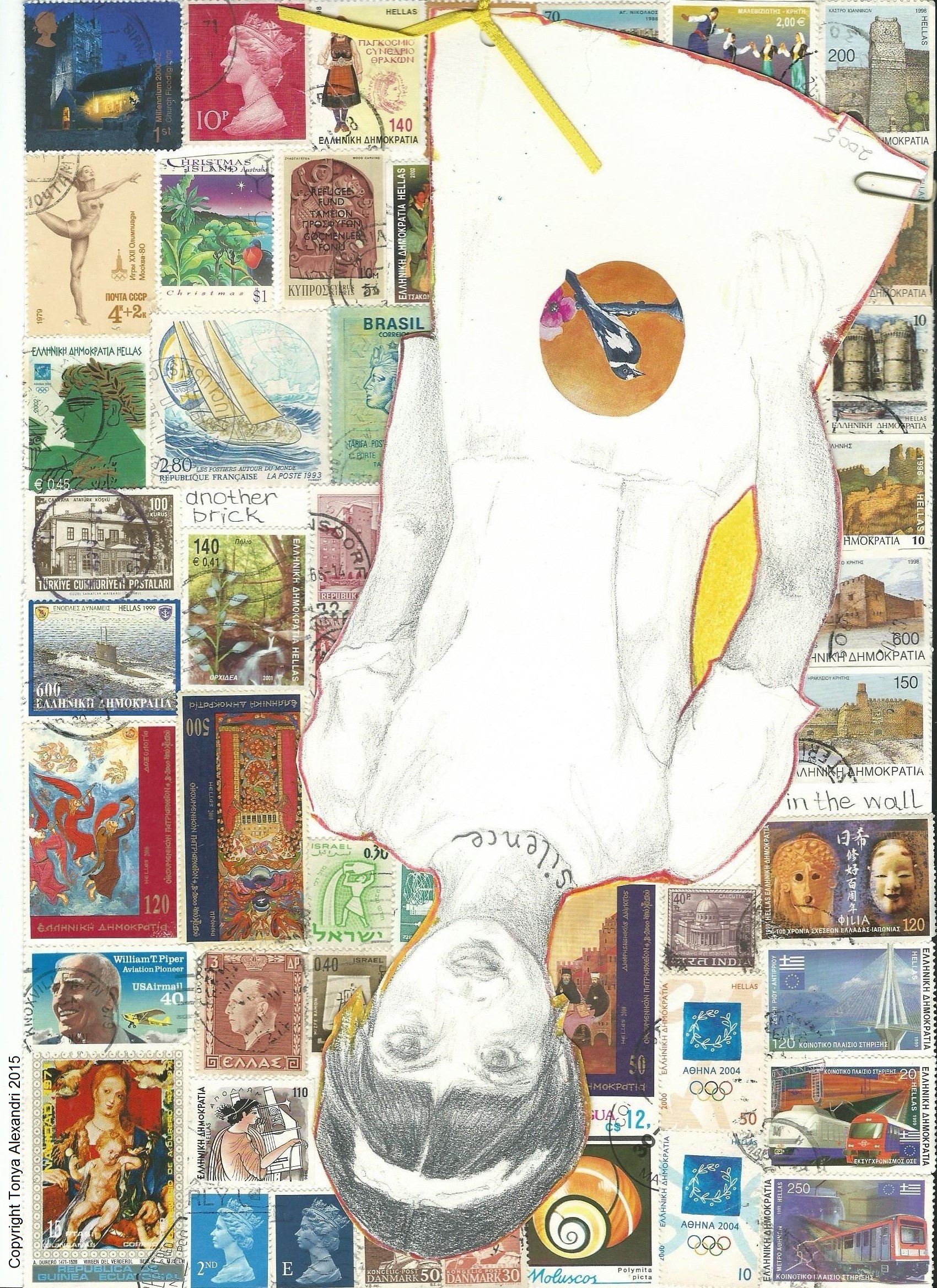 B. Hide and seek 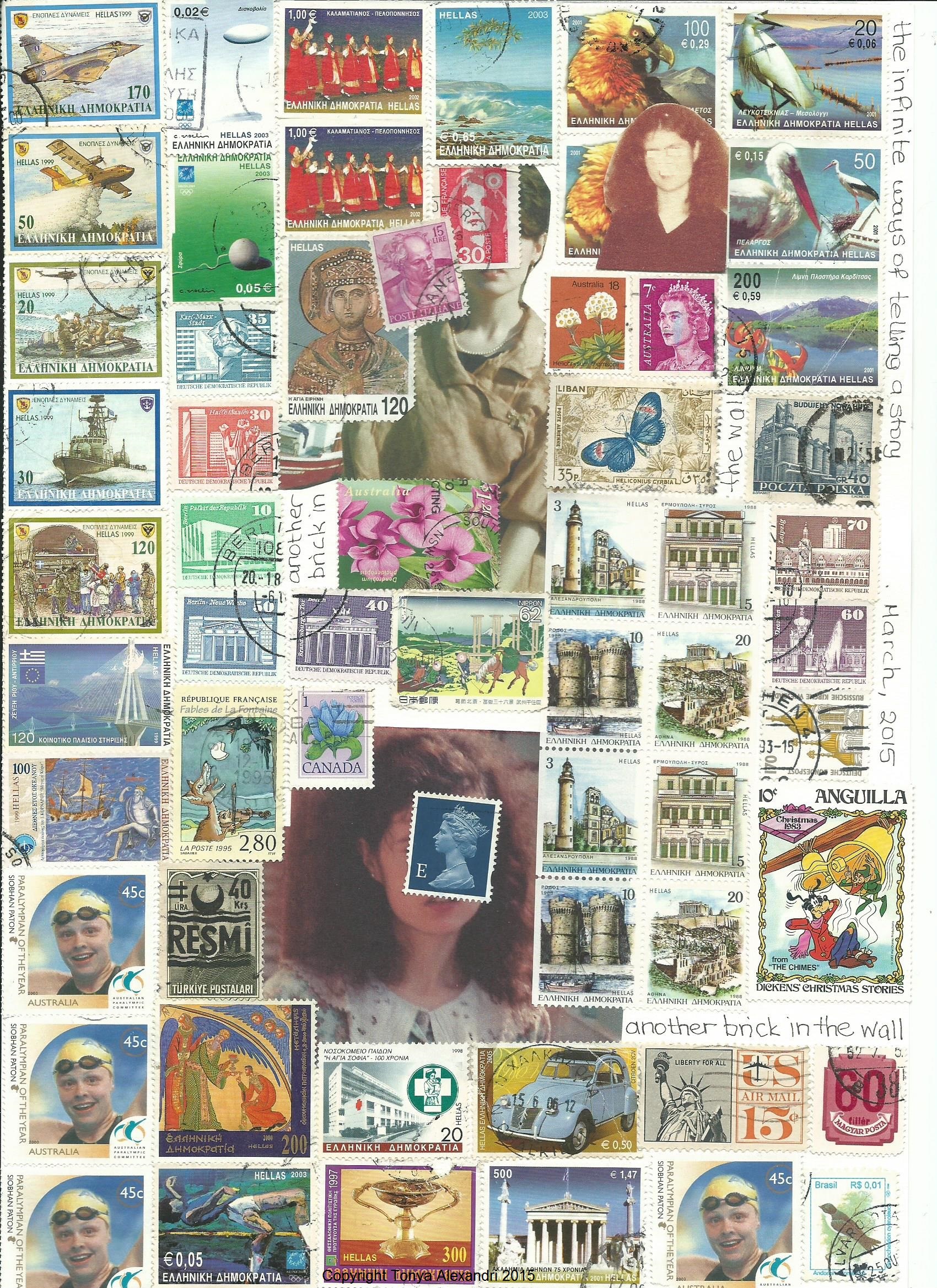 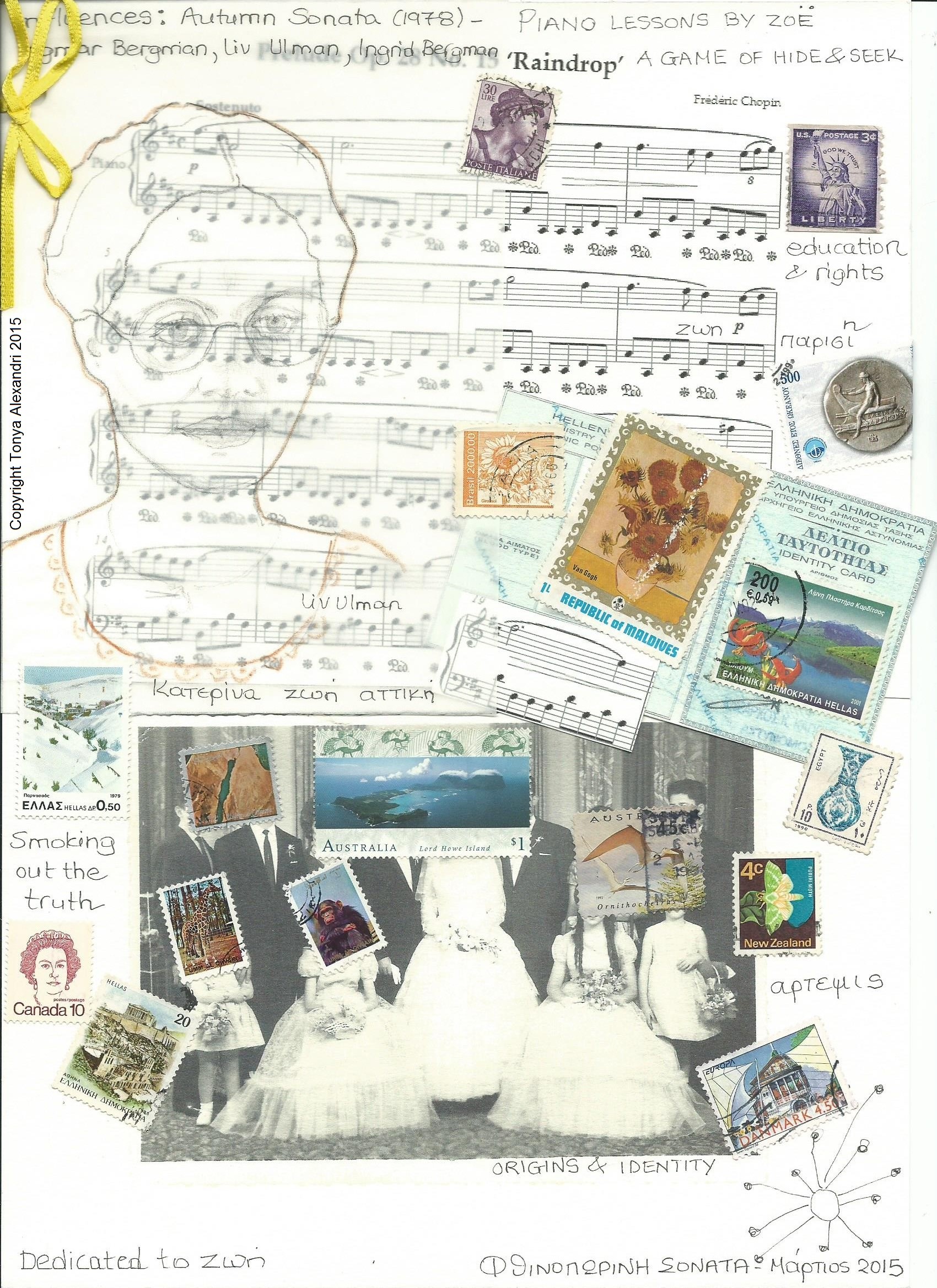