1. Influences and travels across time 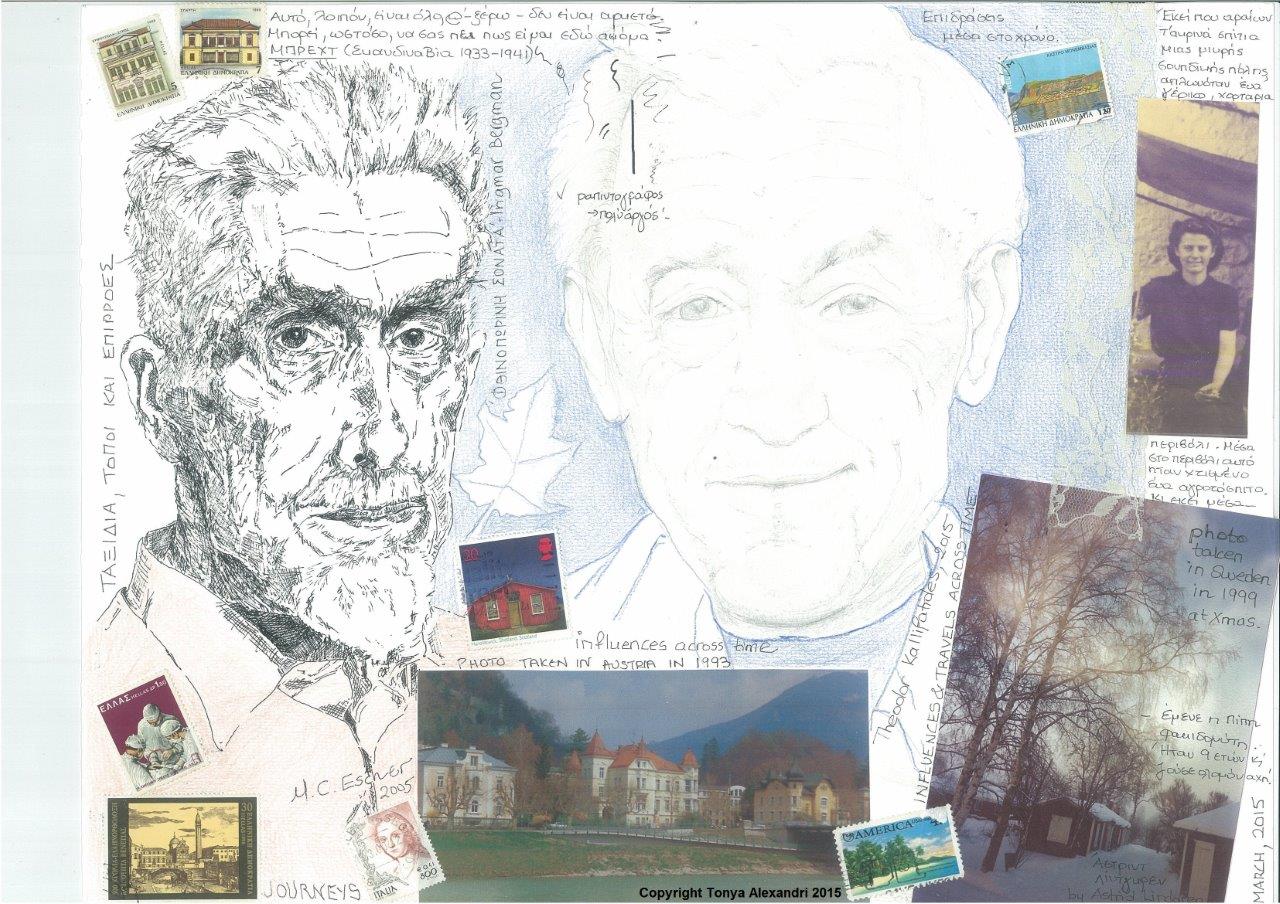 ‘That was the first and last pink shirt of my life, which lasted 25 years. I took it with me to Sweden so that I could remember the colour of humiliation of those years’.

2. The underlying politics of injustices, violations and losses

‘That is how I understood that in the west we view each other as an invaded country. We do whatever we like with the face and the body of the people around us. We colonize their destinies. We rob them of their sufferings and exploit their stories’.

An ink sketch I did in 2005 depicting the manipulation, the threats and difficult emotions that facilitated the ongoing dynamics of violations. Once the baggage in the frog symbol is processed and understood by survivors, then the dynamics and people involved become apparent. 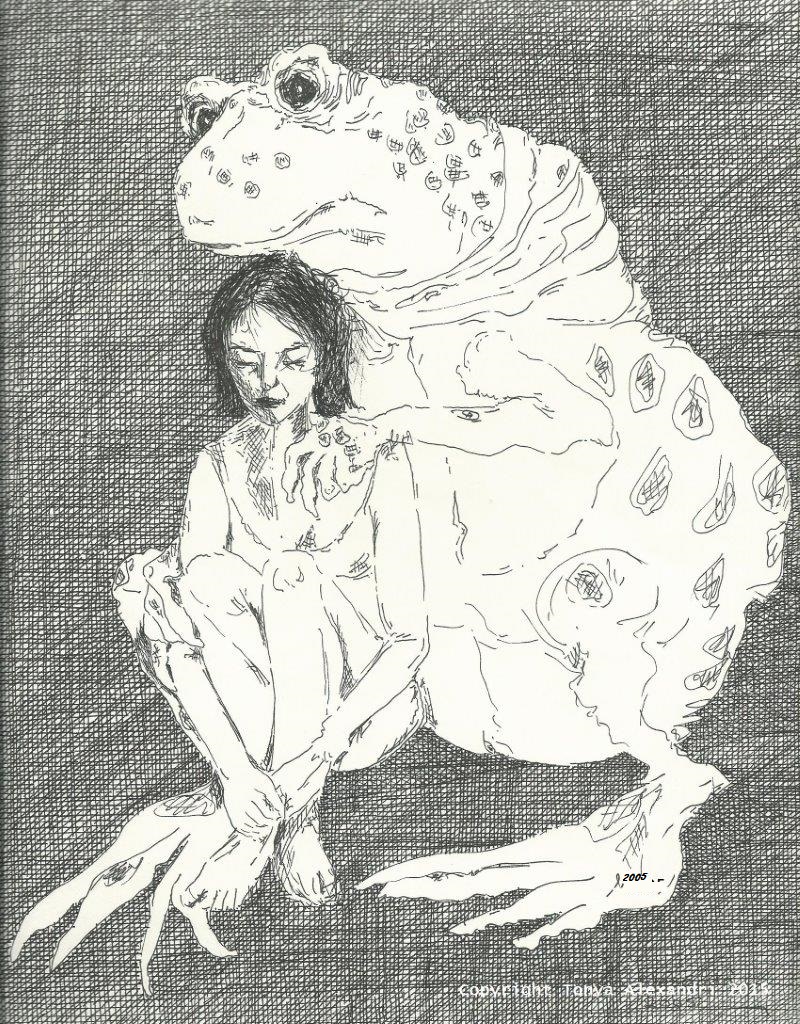 Political dimensions of trauma and language

‘Born outside the walls my father spent his whole life struggling to get in. The same happened to me. I spent my whole life trying to enter the walls of another society’ (Mothers and Sons, 2007, Theodor Kallifatides)

I have written in various texts posted here about the reasons behind my decision to create this site, which practically meant to finally break the silence in a big way. However, I need to mention that this site is only one aspect of my battle to restore and fight for justice, and I can add now that this journey has allowed me to transform tangible injustices into legal battles. It is all part of an immense effort to restore, heal and bring about some justice because as we each heal and fight for justice, dynamics around us change and some greater healing beyond us takes place. This note today focuses more on the political dimensions and the underlying, connecting thread of injustices that my family and I have suffered consistently in various contexts. Ultimately, trauma and abuse, discrimination, targeting and harassment, bullying and rights violations are all political. I think it is important to mention here that relevant literature, statistics and research findings suggest that childhood trauma and early victimization not only encourage but also facilitate re-victimization in adulthood. Survivors are usually stalked, harassed and deprived of their rights in multiple diverse contexts before they can finally manage to break the silence or understand dynamics and self-sabotaging decisions. However, I will not go into this here, but I do refer to these studies in other parts of this site. Additionally, I would like to mention that although I use the term ‘survivor’ throughout this site, it is necessary to bear in mind that this is only one aspect of their identity. Survivors are many other things, and much more than the traumas and wounds they have survived. Finally, in this post I briefly refer to how language defines us and is linked to our identity and I also partly explain why this site had to be bilingual,– apart from the obvious reason that using two languages gives me the possibility to reach a wider audience.

To begin with, nationality, motherland, immigration and relocation, belonging, language and bilingualism and identity have always been salient issues for me and intertwined with the injustices and losses I have suffered. Many of these issues have surfaced in my artwork, both in the past and in this last series of drawings. Across time I have also explored these topics in educational contexts. Specifically, I explored issues of migration, language, identity, transition and adaptation in a project titled Migration for Love:  ‘A social psychoanalytically informed exploration of identity transitions in women who have immigrated to partners’ country’. As mentioned in the previous post, experience and knowledge, research, essays or projects are all situated within time and space and particular theoretical frameworks. In this case, a social psychoanalytic framework was used to explore unconscious processes at work during women’s migration to partner’s country and how this shapes their sense of self. Semi-structured interviews were conducted to provide interviewees with freedom to narrate their story and the free-association narrative interview method was used to generate more complex data. My findings seemed to support Akhtar and others’ claims that certain factors like mastering the new language, and embracing cultural diversity among many other things, may facilitate adaptation and may lead to the emergence of a new reconsolidated hybrid identity, which is ‘not a synthesis but perhaps a multiplicity of selves’ (Copelman, 1993, cited in Akhtar, 2004). Specifically, it is assumed that language is not a neutral means of expression, but it is situated in the culture. It is the product of the culture and it reflects life in a certain time and place. Actually, the interviewees’ were highly invested in education and language.  Both feared that their children could be engulfed by their partners’ culture and language, which could mean loss of self and would ultimately sever cultural continuity. Mercer (2008) claims that. one’s mother- tongue is never as completely invested as when one comes to live in another country where a different language is spoken, I will not go into these topics in depth here nor post the whole essay, but I hope it has become somewhat clear that language and identity are intertwined and that both languages play an important role in my life and are reflected in the things I create. Both languages define me and I oscillate between the two at different times. I use both languages in my artwork and maps of places I have lived are often depicted. I have often felt suspended between these two languages, these two physical places and these two socio-cultural contexts and my two identities and cultural influences are in constant interaction, as in all immigrants, refugees or bilingual individuals.

Inevitably, adversity, trauma and rights violations have made this experience much more intense. Coming to live in a country with a history like Greece increased the potential for rights violations & discrimination on the basis of Otherness. For those who are not aware of Greek affairs I should mention that in Greece one is still constantly aware of the circumstances that developed after the civil war that took place after World War II and one may still suffer the consequences. Many people have been persecuted and victimized since, for their political views and opinions, for their Otherness. After all, Greece is the European country whose beautiful islands were used as places of exile for political prisoners up until the 70s! Anyway, to return to my personal experience, I think it is time to refer to only some tangible injustices in this area for the time being. Despite my being born to Greek immigrant parents, according to my legal documents, at least, I was illegally denied Greek citizenship and was granted a resident permit. I remained in this status despite my numerous petitions to the Greek authorities and despite the existing laws at the time (in the 1980s). When I turned 21 and was eligible to voting the authorities blatantly denied me the right, since I suppose my liberal political preferences were not to their liking. Although, I was of Greek origin, I obtained Greek citizenship at the age of 23 and only because I married a Greek citizen. However, although I was denied citizenship and the right to vote, in other contexts I was not considered an immigrant or a refugee, but a Greek citizen. For instance, I sat the university entry exams with Greek candidates, not immigrant, foreign or Cypriot candidates, which would have been advantageous for me in terms of university choices. Political discriminations and rights violations based on Otherness or on my political views and outlook on life have occurred across time. However, being targeted and stalked for one’s beliefs, religion or nationality has an immense impact in all areas of one’s life.

Theodor Kallifatides has explored these issues in his books and articles. He is a prolific writer who has written about marginalized immigrants and people living in exile and about language and identity. In Modern Greek Literature: Critical Essays, Monika Kallan writes about the profound impact that the change from first language to second has had on him and how writing in a new language has transformed both his past and present and changed his identity. Kallifatides was born in Greece in a small village in 1938. His father was a Greek refugee that had fled Turkey in 1924. Later, when he was a child his family was forced to leave the village they had settled in and move to Athens, due to his father’s political views this time. He writes ‘My father had sworn to never set foot in the village. He had two homelands and there was no room for him. A fugitive from Turkey he became a refugee in Greece. How could the people in his village have treated him the way they did? Who had handed him over to the Germans? Could there be another explanation other than the fact that he was not a local? Embittered, hurt and proud he was forced to find his homeland within him, a stranger among strangers in Athens’ (Kallifatides, 2012). In the early sixties, in his twenties, Kallifatides emigrated to Sweden, where he has lived ever since. He writes in both languages and explores issues of identity, language, transition and immigration and discrimination based on ideology or class.

The following extracts are from the Greek edition of his book ‘The past is not a dream’ (2012, Εκδόσεις Γαβριηλίδη)

‘In the village things were different, I knew everyone and everyone knew me, I said whatever came to my mind, the words flew out of my mouth suddenly and swiftly like swallows. Perhaps this is what Homer had in mind when he talked about ‘the flying epics’. I did not understand then. Much later, an immigrant in Sweden, the same thing happened to me. The obvious in life was lost and it became a loss that cannot be described. The obvious is indescribable, that is why it is self-evident’

‘The son of the teacher from Molai refused to exchange what he had inherited with what the city offered and which would never become his. He denied everything……  The prisons and the islands of exile were still full of political prisoners…… In short I was still in my village, where a man stands upright like a cypress tree and as motionless as a stone’

‘It was in 1956. The plans for the future were clear. I would go to university to study Law, my father’s dream, or Philosophy, which was my dream. Most candidates passed with the aid of preparatory courses (frontistiria). I neither had the necessary finances for these courses, nor did I think that I needed them. A bigger problem was the certificate from the police confirming that I was true Greek with a register as white as feta cheese ‘.

‘I would not continue my father’s work. On the contrary, I was to inherit his fate. I too would become a fugitive and a stranger ‘.

‘’I had resumed writing, but something strange was happening. Greek was not compatible with my life, the city, the weather, the trees and lakes, the sun, the sky and the clouds. I felt like I was singing off key. Had I started to forget Greek? No. I hung out with Greeks every day, I read newspapers, I gave speeches against the junta at various meetings. But I could not approach Swedish reality with my language. Swedish reality had its own language’.