When trauma occurs it first impacts the autonomic nervous system and elicits dysregulated arousal. Our frontal lobes shut down and our reactions are subcortical, in other words, when faced with trauma our instinctual/ physical defences are automatically engaged. Fighting and fleeing are active defensive responses, but often they threaten survival, and therefore, they may be replaced by more passive responses like submission and freezing, which over time contribute to trauma symptoms. As a result, becausetraumatic events cannot be experienced reflectively or regulated by thought, traumatic experiences remain unintegrated with emotions and meaning of the trauma and they manifest in the form of embodied PTSD. There are many therapists and researchers in the field now that believe that a lot of trauma and dissociative symptoms are physical and are stored in the body when there is no outlet to the experience. Also, many symptoms may represent particular physical traumas. Pat Ogden suggests that trauma survivors have dysregulated nervous systems and unresolved animal responses and that trauma has more to do with somatic aspects. As already mentioned, trauma responses are instincts (subcortical), and in PTSD these subcortical responses take over because they began and were not completed. If these natural, involuntary reactions are not integrated with emotions and the meaning making of the traumatic experience, the trauma manifests as PTSD symptomatology. Ogden and Minton (2000) suggest that during a traumatic event a resolution of responses might be accomplished by fighting or fleeing; however, for most traumatised individuals this does not occur and they are plagued by the return of incomplete or ineffective sensorimotor reactions in such forms as intrusive images, sounds, smells, body sensations, physical pain, constriction, numbing and the inability to modulate arousal.

Moreover, if trauma is complex and prolonged it manifests in complex PTSD and dissociative disorders. Onno van der Hart views DID as the most complex form of PTSD and PTSD the least complex dissociative condition or disorder. Both PTSD and complex PTSD involve dissociation on a continuum. Over the last years, the integration of psychology with biology and advances in neuroscience and developmental and attachment theory, has allowed an expansion of knowledge and has led to a greater understanding of natural defences to trauma, especially, dissociation, which evolves out of our early relationships with our caregivers, which impact the development of the right brain (Allan Schore). Dissociation is a deep survival strategy, which allows detachment from unbearable situations – ‘escape when there is no escape’– but compromises trauma survivors’ ability to integrate experience (Allan Schore). It means survival and it provides a miraculous solution initially, but fires back, preventing growth and freedom in adulthood because it ‘becomes rigidity and it becomes dysfunctional’ (Dan Siegel). Dissociation becomes a stress coping regulatory strategy, which creates a lot of problems for survivors in adulthood and actually often opens the door to further victimization and abuse. Allan Schore believes it is not so much the trauma that is a limiting factor as the defenses against it. Therefore, it is important for therapy to focus on the alteration of stress coping strategies like dissociation and affect dysregulation. Dan Siegel refers to dissociation as the capacity for divided attention, which he distinguishes from the freeze response. Moreover, both hyperarousal and hypoarousal can lead to dissociation. In hyperarousal, dissociation can occur because the intensity and accelerated pace of sensations and emotions overwhelm one’s cognitive processing so the person cannot stay present with the traumatic experience, whereas, in hypoarousal, it may manifest as reduced capacity to feel or sense events and one may experience a sense of leaving the body. Dan Siegel claims that trauma disrupts the flow of energy and information, which are fundamental components of a healthy state of mind. It impairs integration of the mind, which is the linkage between differentiated parts and which is the basis of affect, attention and behaviour integration (Dan Siegel). Allan Schore suggests that dissociation is a lack of integration within the right hemisphere of the brain. Additionally, Onno van der Hart claims that we are born with an innate integrative capacity, but severe trauma impacts this capacity and that during trauma the mind breaks or falls apart into different parts/ subsystems, which are stuck in ‘trauma time’ and which when triggered can re-enact or relive the trauma. Finally, Onno van der Hart also views dissociation as an underlying organisation of symptoms instead of merely one symptom of traumatisation and believes that dissociation is the key concept to understanding traumatization. He also believes that chronic child abuse and severe forms of traumatisation involve greater levels of dissociative symptoms (Onno van der Hart).

Trauma in childhood impacts our development and future well-being and influences what we become and how much of our potential we will be able to realise. Early and/or prolonged repeated trauma does not only cause difficulty in regulating emotions, variations in consciousness (dissociation, depersonalisation) and changes in sense of self, but also causes loss of intimacy, distrust, somatisation and immune system depletion, loss of sustaining faith, avoidance and numbness, addictions, etc. Dan Siegel discusses trauma from a developmental context and suggests that traumatic experiences become embedded in the frame of the developing mind, which compromises how a person will respond developmentally. More specifically, Allan Schore claims that the evolution of attachment theory has reached a point of interpersonal neurobiology and we now know that early trauma leaves an imprint on the right brain, where traumatic memories are stored. Abuse, neglect, maltreatment from our primary caregivers impacts the early developing right brain, and therefore, there is emphasis on the importance of the early attachment and the development model when treating trauma.Allan Schore claims that we now know that dissociation evolves out of early attachment relations, which directly impact the early right brain where stress regulation occurs. Moreover, chronic exposure to cortisol will change synapses and dendrites in hippocampus and smaller hippocampal and amygdale volume has been reported in conditions like PTSD, DID and other disorders linked to child abuse. As a result of these discoveries or re-discoveries in the field over the last years 15 years or so, there has been a paradigm shift from cognitive and behavioural theories into an emotional psychobiological theory of trauma. This shift has resulted in neuroscience validating the unconscious in everyday life and the centrality of emotional process. There has been a shift from explicit left brain processes to implicit, unconscious psychobiological processes linked to the early developing right brain. This has brought about a shift in understanding defences to trauma and dissociation and dissociated affect and how these can be worked out clinically. Intense fear and other difficult feelings can be in the body and can be dissociated. This centrality of dissociated emotions involved in trauma is also showing that insight psychotherapeutic driven models and simple talk therapy are not adequate because research studies have shown that when the stress is greater it moves from the left brain to the right brain (Allan Schore). Therefore, in order to heal and overcome, we need to access the subcortical parts of the brain and reach a deeper understanding of our psychological core in order to decrease dissociation and affect dysregulation and to allow our coping defenses to become more complex and mature. In other words, deeper healing allows us to increase our tolerance of stress, decrease our tendency to dissociate and generally cope with anxiety/fear in more positive ways. CBT models which rely on left brain processes work towards inhibiting and controlling emotional processes, not regulating emotions (both conscious and unconscious) and they further put emphasis on symptom reduction not deeper growth and development, which would require restructuring of the unconscious  (restructuring the right brain). Actually, over dependence on the left brain may result in lack of reflective capacity and left brain processing may interfere with healing, and moreover, it often constructs a convenient life narrative.So encouraging the expression and processing of dysregulated and dissociated affects (feelings) and helping trauma survivors re-experience tolerable doses of trauma in a safe environment is necessary in facilitating healing. Neuroscientists have found that the right brain, which stores implicit memory and survival defences like dissociation (not only the trauma but the defences against it), is dominant for the processing of unconscious self-images, as well, which can often be contradictory to the conscious sense of self. It is also suggested that the plasticity of the brain lies more in the non-conscious parts of the brain (Allan Schore).

The Haunted Self: Structural Dissociation and the Treatment of Chronic Traumatization by Onno van der Hart, Ellert Nijenhuis and Kathy Steele

In her memoir My Father’s House Sylvia Fraser, a Canadian writer, journalist and one of the early survivors to break the silence, wrote in 1987 that ‘though many of my friends feared that my book would prove to be an act of professional suicide, instead it helped to open the floodgates of revelation by other survivors, forcing public awareness of an appalling truth: Sexual abuse was endemic to our society, cutting across barriers of wealth, education, religion and social prominence’

In this same book Fraser wrote ‘I had simply caught an undercurrent in our culture’s collective unconscious as it swelled to a crest, sweeping aside decades of illusion about the sanctity of the family and the safety of children in ordinary houses lining ordinary streets. As we discovered during the following decades, it wasn’t just the daughters of drunks and ne’er-do-wells who were at risk, but those of doctors and lawyers; and it wasn’t only girls but boys as well; and the predators weren’t just the perverts who hung around parks, but persons entrusted with helping the troubled – counsellors and ministers and priests; and it included those with the greatest opportunity – hockey coaches and boy-scout leaders and teachers; and it wasn’t just individuals, but groups of pedophiles who preyed together on the most vulnerable, such as the handicapped and kids in reform schools; and it wasn’t only the pedophiles that were to blame but those in authority who covered up for them – the principals and the politicians and the archbishops’ Sylvia Fraser (2010-09-30) 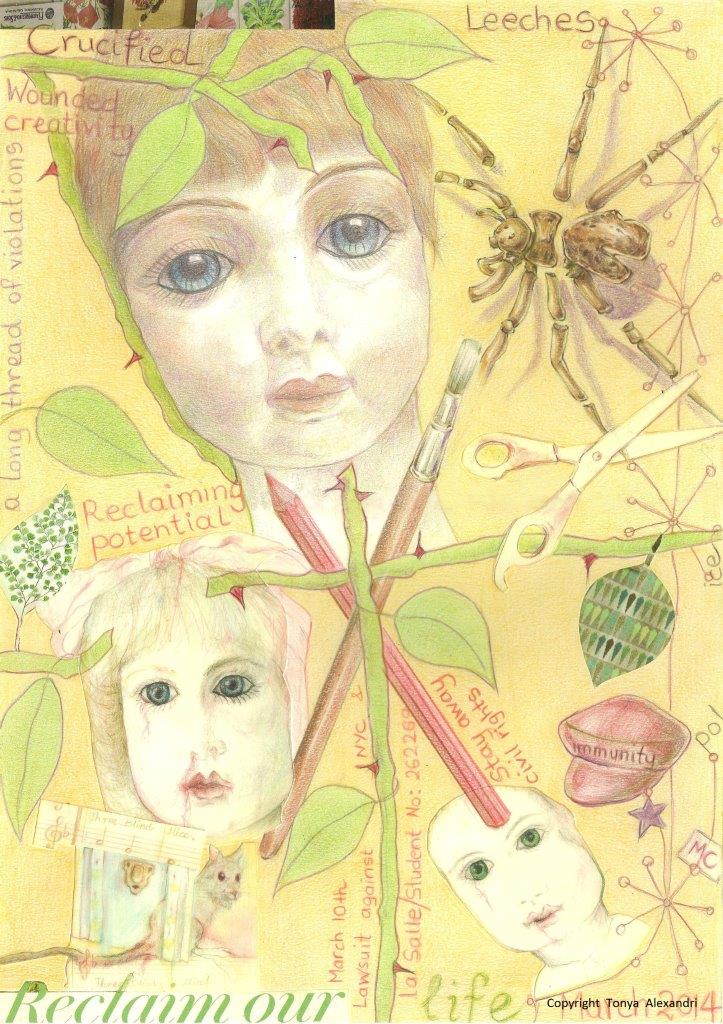 Tell me what you’ve seen

The lust and the avarice

The bottomless, the cavernous greed…….

Lullaby me to sleep

http://www.youtube.com/watch?v=ZBiVd8SxCkc   Natalie Merchant performing live at the Perkins School for the Blind Possibilities Gala on May 7, 2009 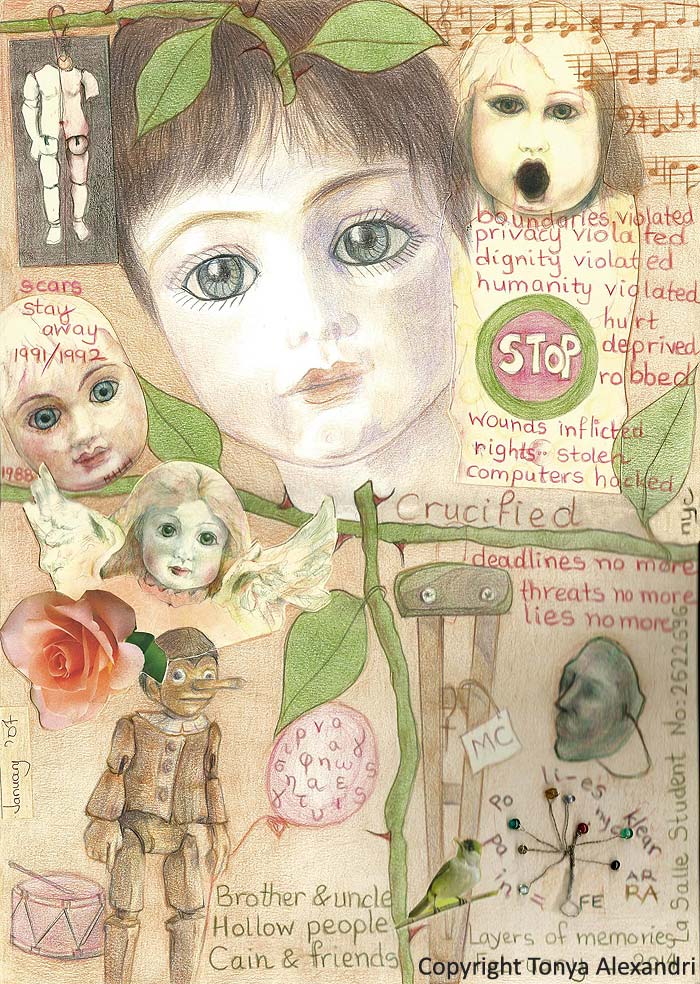