‘Artwork can be an expression of several types of memories as it engages multiple cognitive and perceptual neural pathways processes’.

Connecting through art and memory 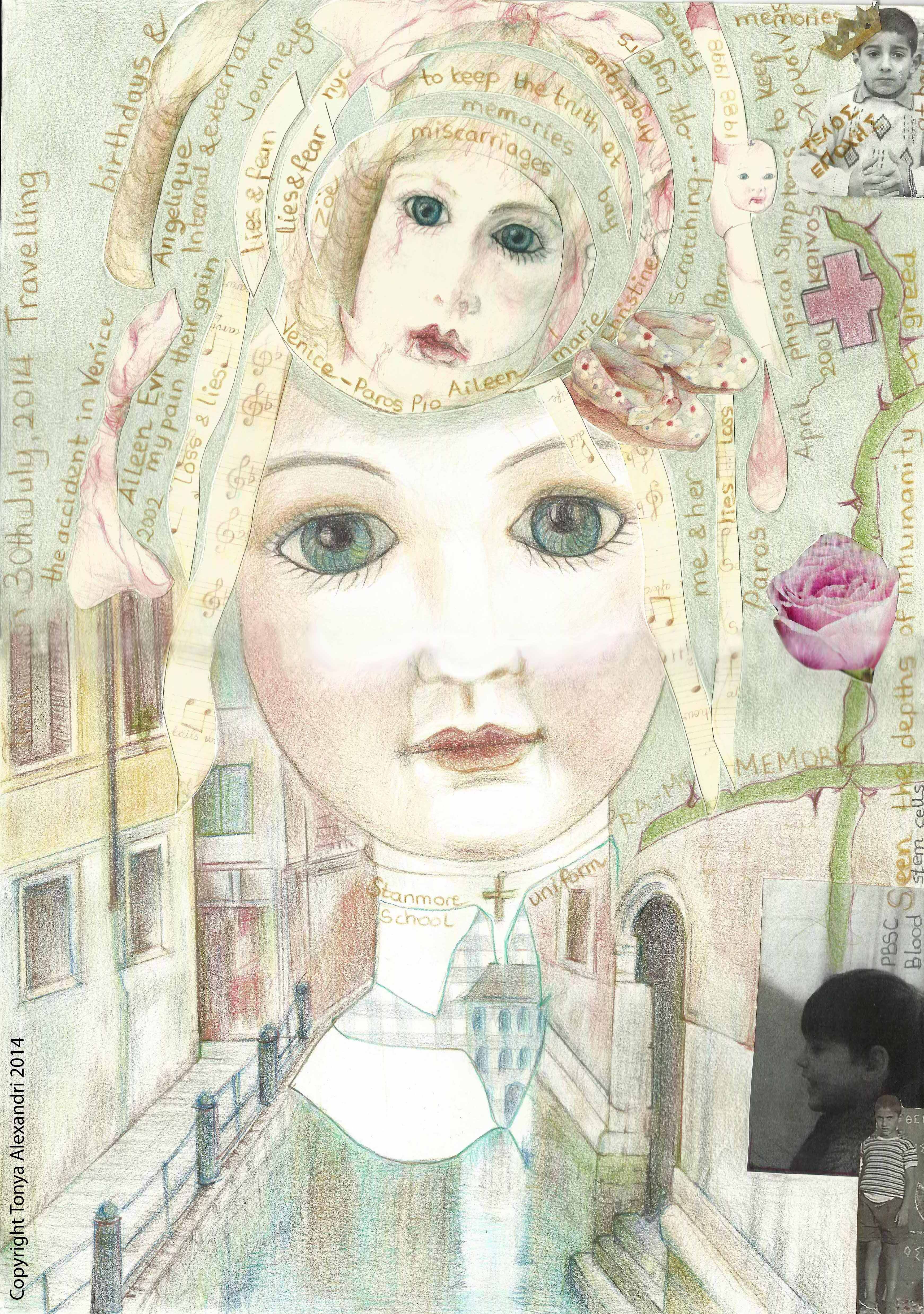 Extracts from books and fragments of memories and images

1) The Tide in Tucson by Barbara Kingsolver

‘Want is a thing that unfurls unbidden like fungus, opening large upon itself, stopless, filling the sky. But needs, from one day to the next, are few enough to fit in a bucket, with room enough left to rattle like brittlebush in a dry wind. For each of us— furred, feathered, or skinned alive— the whole earth balances on the single precarious point of our own survival. In the best of times, I hold in mind the need to care for things beyond the self: poetry, humanity, grace. In other times, when it seems difficult merely to survive and be happy about it, the condition of my thought tastes as simple as this: let me be a good animal today. I’ve spent months at a stretch, even years, with that taste in my mouth, and have found that it serves. But it seems a wide gulf to cross, from the raw, green passion for survival to the dispassionate, considered state of human grace’.

‘Every one of us is called upon, probably many times, to start a new life. A frightening diagnosis, a marriage, a move, loss of a job or a limb or a loved one, a graduation, bringing a new baby home: it’s impossible to think at first how this all will be possible. Eventually, what moves it all forward is the subterranean ebb and flow of being alive among the living. In my own worst seasons I’ve come back from the colorless world of despair by forcing myself to look hard, for a long time, at a single glorious thing: a flame of red geranium outside my bedroom window. And then another: my daughter in a yellow dress………. Like a stroke victim retraining new parts of the brain to grasp lost skills, I have taught myself joy, over and over again. It’s not such a wide gulf to cross, then, from survival to poetry. We hold fast to the old passions of endurance that buckle and creak beneath us, dovetailed, tight as a good wooden boat to carry us onward. And onward full tilt we go, pitched and wrecked and absurdly resolute, driven in spite of everything to make good on a new shore. To be hopeful, to embrace one possibility after another— that is surely the basic instinct’.

Touchstone Anthology of Contemporary Creative Nonfiction: Work from 1970 to the Present (2007-12-11/ Kindle Edition)

2) Getting Along with Nature by Wendell Berry

In other words, we can be true to nature only by being true to human nature— to our animal nature as well as to cultural patterns and restraints that keep us from acting like animals. When humans act like animals, they become the most dangerous of animals to themselves and other humans, and this is because of another critical difference between humans and animals: Whereas animals are usually restrained by the limits of physical appetites, humans have mental appetites that can be far more gross and capacious than physical ones. Only humans squander and hoard, murder and pillage because of notions.

Touchstone Anthology of Contemporary Creative Nonfiction: Work from 1970 to the Present (2007-12-11/ Kindle Edition)

‘Ritual and organized abuse often involves multiple abusers of both genders, extreme violence, mind control, systematic torture and in many cases a systematic belief system, which is sometimes described as religion. It is highly organized and of necessity secretive. It is often associated with other major crimes such as child pornography, child prostitution, the drugs industry and trafficking in women and children to name but a few’ (Laurie Matthew, 2004)

In 2004 Laurie Matthew had already been working with survivors of this type of extreme abuse for over 20 years. Her short stories about ritual abuse resemble Aesop’s tales. Her animal characters facilitate understanding and make the reading of the stories easier, since abuse, and especially, organized extreme abuse is never a palatable subject.

Below are short extracts from one of the stories in Laurie Matthew’s book Fight! Rabbit! Fight!

‘Though she feared Rabbit thought. Though she trembled Rabbit planned. Though she suffered Rabbit organized. She had to escape for good. Or she had to die. There were no other choices. She planned well.’

‘When the time was right. When the plans were laid. When all was organized – and Rabbit could organize well. She had been well taught, but that’s another story, Rabbit struck her own spark.’

‘Rabbit fanned the flames of the fire, encouraged its life. The fire grew into a blaze. Rabbit gloried in the blaze. She fed and nurtured the blaze. The blaze became an inferno. Rabbit felt her power. She could create but they could not take her creations. She could also destroy and cleanse with fire. Rabbit turned from her inferno. She ran to freedom. This time she had a plan.’