A safe spatiotemporal room of your own 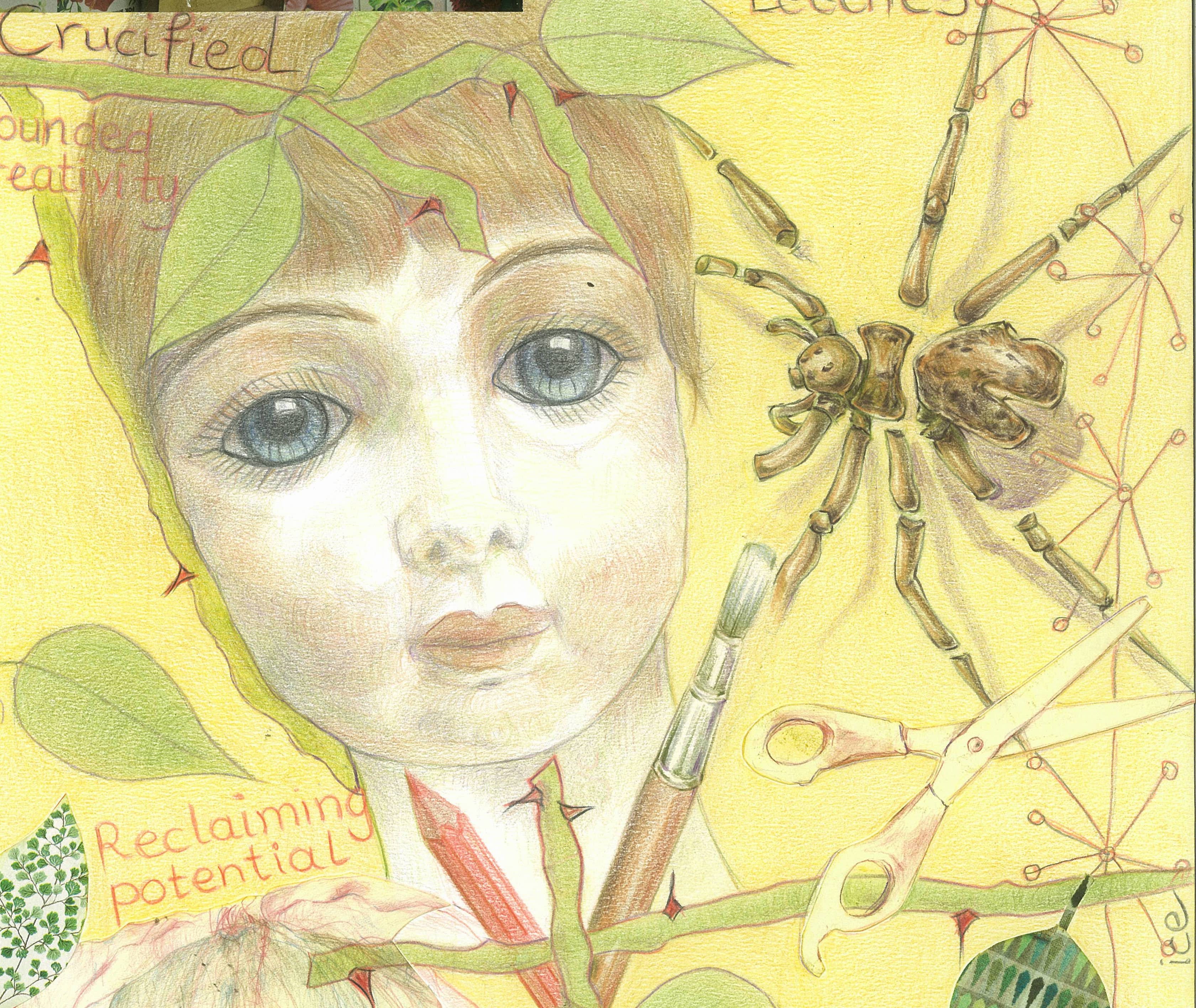 Art has always been both important for me and oppressed within me. It has been of me and at the same time resisted. What I know now is that our inner most desires and talents or those things that press urgently  to become or see the light of day, which are often resisted by us and / or oppressed by others in our environment and society at large, are also our passport to freedom and integration. Unfortunately, they are also the aspects of ourself that are tied to our deepest wounds. And yet they are our ticket to a kind of bittersweet homecoming back to our own self.  As we engage with painting, aspects of our inner world and memories arise and some things sort themselves out within the artistic process.

At this point of time and place if I were to give advice to my much younger self or anyone else I would simply say create a safe room of your own, where you can be creative and expressive, and where you feel free to do so. By creativity I don’t only mean artistic creativity, but all the forms that this inner drive takes for different people. I spent my late teens and twenties reading second wave feminist books and articles. I read Virginia Woolf, Simone de Beauvoir, Angela Davis and many others, I marched in the streets for women’s rights and for a while contributed to a women’s rights magazine, and yet in my personal life I unintentionally let so much of me get lost. It got lost in survival, in busyness, in caretaking, in duty, in being a good girl, in others’ projections of what I was allowed and worthy of doing, and in doing so, I forgot to create a safe room of my own, where I could do what I needed to do without asking for permission and without being apologetic of what I liked to do. Mostly, I failed to safeguard what was mine to begin with. I made choices that then limited my choices. In her book, The Testaments, Margaret Atwood writes: “I made choices, and then, having made them, I had fewer choices.”

In this safe room you need to let go of your perfectionist tendencies, which weren’t even yours to begin with, and others’ intentions for you and ideas of what is suitable or deserving of you. You need to simply do, to practise and learn, maybe on your own initially, until you can build an inner muscle, acquire some learning and can discern the good intentioned others. Do not listen to people who feel entitled to decide who deserves or is worthy of what, who gets to have a piece of the pie, who gets to draw a line or sing a song. These last few weeks here in Greece we have been witnesses to the MeToo movement. Mostly women in the limelight, athletes and actors, have been speaking out about different shades of harassment and abuse in their work environments, but sadly also, in learning contexts, where teachers have misused power to seduce, discourage, break confidence or convince young aspiring actors to give up acting. University students have also broken the silence about discrimination and misuse of power. The stories involve different forms of abuse, discrimination and harassment, but the common thread that runs through all these narratives is misuse of power on the basis of gender, age, status and power.

So, take your place in your life and claim what has been given to you, what is inherently yours. Initially, don’t worry about quality or quantity, just work at it, just engage and don’t fear the flow. Learn and practise and express your bodily sensations, emotions, thoughts, memories, doubts, inner conflicts, fears, and sensitivities, all that defines your humanness. Step out of boxes and tight containers. Get off the director’s couch. Study drama, learn the art of acting and then perform on a stage or in the street. Paint, sing, play a musical instrument, cook, study the stars, garden, sculpt, write, run, jump, delve into a topic and learn to your heart’s content even if the topic interests only a few. Safeguard your time, even if it’s a few hours a week, and your space, even if it’s only a table and a chair, and above all, protect and nurture your talent or skill or proclivity. Don’t let it go underground. Don’t let it get buried by societal debris. Don’t let it fossilize. Don’t stand by apathetically while it’s being shattered. It’s yours for the taking.

Don’t let it transform into panic and cognitive dissonance. Maria Papageorgiou, a Greek musician, who has documented her ten year experience with panic attacks says: “An anxiety attack is a small bell. There comes a time in your life when there is an imbalance within you. That is, you want two different things. And this manifests somatically. You sweat, some people cannot eat, some get dizzy, others feel numb, some faint, you’re out of breath, and simple everyday things seem very difficult. From drinking coffee with friends to driving or, even worse, to being exposed on stage. The strange thing is that there is no warning before it happens to you, and suddenly you enter a vortex, which creates a vicious circle of thoughts that does not allow you to “cleanse” your head and feel optimistic, instead you “shrink” and feel trapped. Like when you get claustrophobia in the elevator and you say “I have to get out of here”. You have to leave, but you don’t know where you want to leave from and what you want to leave.” (Η κρίση άγχους είναι καμπανάκι. Έρχεται κάποια στιγμή στη ζωή σου που υπάρχει μια ανισορροπία μέσα σου. Δηλαδή θέλεις δύο πράγματα διαφορετικά. Και σωματοποιείται. Παθαίνεις εφιδρώσεις, κάποιοι δεν μπορούν να φάνε, κάποιοι ζαλίζονται, άλλοι μουδιάζουν, κάποιοι λιποθυμούν, σου κόβεται η ανάσα και τα απλά καθημερινά πράγματα φαντάζουν πολύ δύσκολα. Από το να πιεις έναν καφέ με φίλους μέχρι το να οδηγήσεις ή, ακόμα χειρότερα, μέχρι να εκτεθείς στη σκηνή. Το περίεργο είναι ότι δεν υπάρχει προειδοποίηση πριν σου συμβεί και ξαφνικά μπαίνεις σε μια δίνη και σου δημιουργεί έναν φαύλο κύκλο σκέψεων που δεν σου επιτρέπει να «καθαρίσεις» το κεφάλι σου και να νιώσεις αισιοδοξία αλλά «μικραίνεις» και εγκλωβίζεσαι. Όπως παθαίνεις κλειστοφοβία στο ασανσέρ και λες «πρέπει να φύγω από δω». Πρέπει να φύγεις, αλλά δεν ξέρεις από πού θες να φύγεις και από τι θες να φύγεις…. Μαρία Παπαγεωργίου)

Frequently ask yourself questions about why you are resisting your desire or putting it off for some later time and what you fear most. Explore what might be stopping you in your tracks. Ask questions like: “Have I been killing anything that is alive within me— such as passions, feelings, longings, or creativity? Have I been allowing others or my own habits to take precious time, attention, or energy from me, against my true wishes? Have I been lying to myself about how much it costs me to live with dreams deferred for another month or year?” (Rick Hanson). If survival fear arises carry on with your job and simply carve out a safe spatiotemporal room of your own. You don’t need to commit to it full time until you’re ready and only if you want to. Do what it is you yearn to do for the sake of doing it with no conditions and strings attached to it. Do it and see where it leads you.

Finally, hang out with people that support your aspirations or timid steps and attempts. Protect and guard your aspirations, talents, space and time.  Do not let your desires be drowned by other’s sour intentions, agendas, fears, projections and stifled creativity. Do not let niceness get in the way of healthy assertiveness. Learn to set boundaries even with those you love, with family members and close friends and teachers.