All the information below is essentially based on brief notes from Dan Siegel’s Pocket Guide to Interpersonal Neurobiology: An Integrative Handbook of the Mind (2012, Norton Series) and the following text was written to accompany and enhance the understanding of the more recently posted artworks with the images of the brain.

Knowing about our brain and mind can help us have more control over our brain’s reactivity and can also help us understand our responses better. Through awareness, insight, attention and other processes we can nurture neuroplasticity and change our brain structure. How we focus our attention, which is the process by which energy and information are focused, activates particular brain regions, enabling us to selectively turn on certain areas, which creates the possibility of bringing about structural changes. For example, Siegel writes that knowing about the profound plasticity of the cortex means that we can empower others and ourselves to use attention as a tool to intentionally shape our own neural architecture (2014). Using attention to change brain activity is part of the process called neuroplasticity, where positive life experience changes neural structure. Moreover, there are certain regions that are particularly integrative, which means that they actively connect areas. These integrative areas influence our emotional regulation and emotional and social intelligence (e.g. empathy, self-understanding). Dan Siegel writes that there are nine functions that arise from integrative processing of the middle prefrontal area: body regulation, attuned communication, emotional balance, fear modulation, flexibility of response, insight, empathy, morality and intuition, and that these functions are found as outcome measures for secure parent-child attachment and mindfulness. As mentioned above, knowing about our brain and mind can help us bring about changes and nurture growth. For instance, it may be useful to know that ‘an overly dominant focus on the left hemisphere’s tendency to dominate in logical analysis, linguistic representations, and decoding of the world in literal ways that are often quite distant from the wisdom of the body in families or in schools or in some aspects of digital communication may create a set of learning experiences that does not nurture the basics of interpersonal relationships or self-awareness’ (Siegel, 2012). Our brain is a highly complex interconnected system, which is embodied and embedded in time and space. It is interconnected with the rest of the body through the peripheral nervous system and signals from our body’s physiological processes. Our brain processes are highly determined by hormonal input from the bloodstream and the immune system. Siegel writes ‘we are embodied, not just ‘enskulled’ and we are embedded in a social matrix of interconnected relationships’. Siegel provides a helpful description about the origins of our interconnected, embodied and embedded brains. He writes ‘a sperm and egg unite with their partial complements of genetic material to form a whole, the conceptus. This single cell divides, becoming two cells, then four, eight, sixteen, thirty-two, sixty-four and on and on until the growing embryo is differentiated such that some cells are on the outside and some are on the inside. A portion of the outer layer of cells, the ectodermal layer that is bound to become our skin, folds inward and forms the neural tube. In other words, all of our neurons have the same origin as skin cells! The skin itself is at the interface of the outside and inside world, and so, too, is the nervous system that always links the outer and the inner. The system of the brain not only links the widely distributed nervous system that extends throughout the body proper, but it also continuously scans the environment and responds to what it perceives. We are all about connecting our inner and our outer realities’ (2012).

Our spinal cord (not depicted in my artwork) carries energy and information from our body to the skull-based brain. It sends input to the limbic area and the brainstem. This flow of energy and information first moves to the brainstem. The BRAINSTEM (the old reptilian brain) region resides at the bottom of the skull and helps regulate states of alertness. It serves as the mechanism of basic arousal and the fight-flight-freeze responses to threat. (However, sometimes when we feel overwhelmed and helpless instead of activating the fight-flight-freeze responses to threat we may faint or feign death. This is called a ‘dorsal dive’ in which the dorsal branch of the vagal nerve is activated and our blood pressure and heart rate drop and we may faint). Then this flow of energy and information moves to the HYPOTHALAMUS, which regulates hormonal release to adjust our bodily functions. The hypothalamus is part of this limbic region and it controls the impact of hormones on the brain and the body. From here the flow moves to the CORTEX, which enables us to perceive the outside world and to think, imagine and create concepts. For example, Siegel writes that ‘the frontal portions of the cortex enable us to imagine what freedom is, to think of ways to change the future and make a better world, to plan a more effective way of teaching, and to write poetry that evokes images in others’ (2012). The cortex files and compares past experiences to similar current events or objects. The cortex can help us reflect on our subcortical processes and our reactions and offer us greater choice and the possibility to change or have more control over our actions, emotions and behaviours. Dan Siegel writes ‘we do not have to do whatever the brain is signaling us to do at the moment. We can use a cortical override mechanism to let subcortical processes arise and fall in their activations as we allow them to simply come in and out of awareness but do not follow through with their directives. This is the power of the mind to shift how the brain may be ruling our lives’ (2012). Finally, although neuroplasticity is likely present throughout the brain, studies have revealed that the cortex is highly open to change and growth in response to life experiences throughout the lifespan. Specifically, some flow goes to the ANTERIOR CINGULATE, which coordinates the linkage of feeling with thinking, the registration of pain and other bodily states and helps assess events and orient attention. Another flow moves up into the cortex via the INSULA, which seems to be activated by our mirror neurons according to findings (Siegel, 2012). In particular the PREFRONTAL CORTEX connects these areas and modulates the input from the lower areas. It is central to creating meaning and emotions. Summarily, it integrates social, somatic, limbic and cortical systems into a functioning whole. However, when our prefrontal cortex goes ‘off line’ we can lose our emotional balance, empathy and morality. In Siegel’s book morality is defined as ‘the ability to imagine and enact behaviours on behalf of a larger social good. It may require our ability to make a mindsight map of ‘we’ (2012).

The LIMBIC AREA processes our emotions, subcortical motivations, like our inclination to reproduce, explore, various forms of memory, the appraisal and meaning of our attachment relationships. It also helps assess events and orient our attention. Siegel claims that ‘limbic circuits blend emotions, bodily functions, and social interactions in many ways’ (2012). This area is an interface between the more primitive brainstem and the higher, more rational cortex and it includes parts of the hippocampus and the amygdala. The HIPPOCAMPUS plays a central role in flexible forms of memory, in recall of facts and autobiographical details and gives the brain a sense of the self in time and space. More specifically, the left hippocampus helps to process factual or semantic explicit memories, while the right hippocampus processes episodic and autobiographical explicit memories. The AMYGDALA encodes emotions of fear implicitly without an awareness that this derives from past trauma and experience. Also, the limbic amygdala is important in face perception, as well as in mediating emotional responses of fear and anger. When we become aware of the nonverbal input from the subcortical regions, including the limbic areas, we open the mind to our internal worlds. This input is not word-based thoughts, but mostly felt sensations that arise in awareness and may be difficult to articulate. Siegel writes that the cortical areas are extremely undeveloped when we are born and though genes continue to play an important role in how synapses will later form even in the cortex; this lack of development in utero makes experience especially important in shaping how the cortex matures (2012). 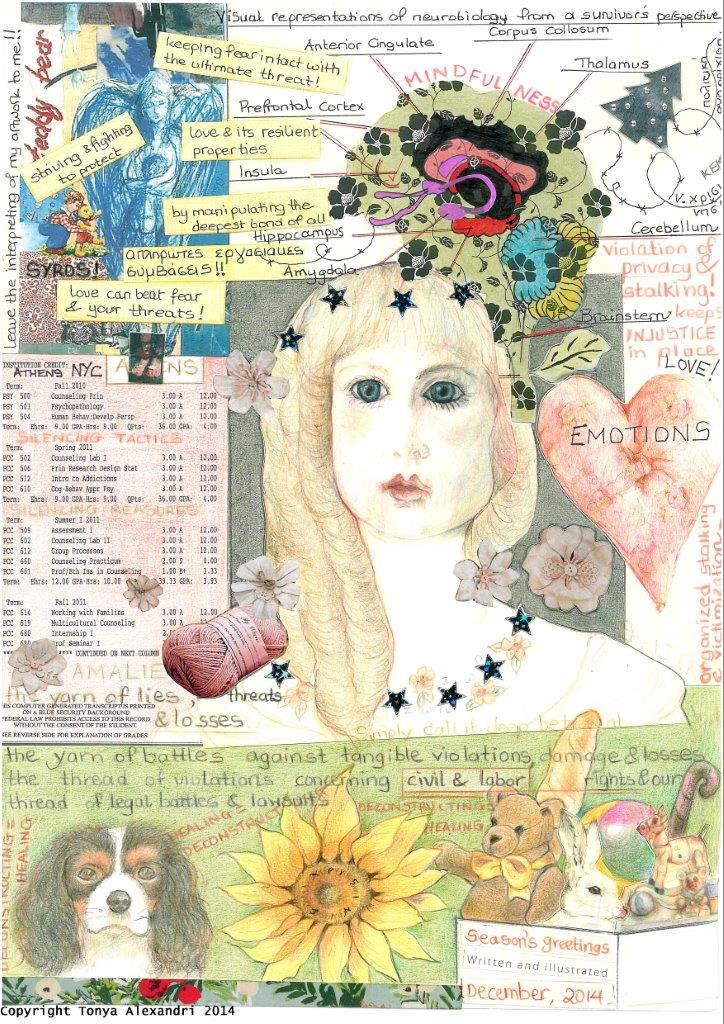 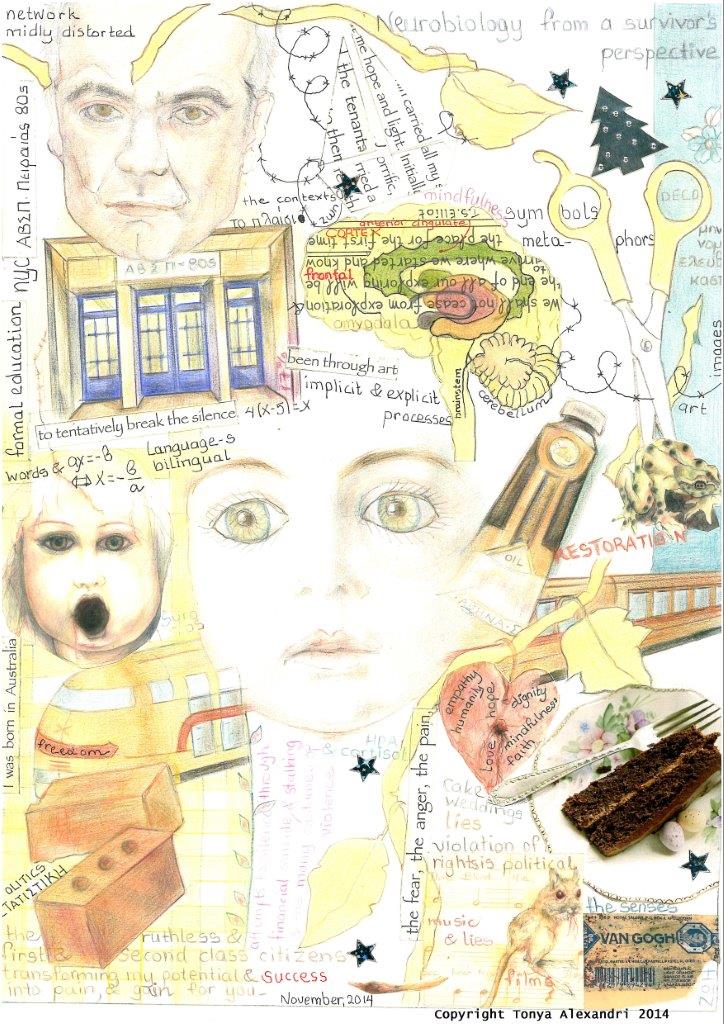