This morning I sat down with a cup of tea and read a variety of short pieces and poems on mothers and motherhood in Greek and English. I am sharing the foreword in Wendy Hollway’s book because her psychosocial approach to viewing and researching things had a lasting influence on me while I was studying at the Open University. I have referred to her work in previous posts and have used quotes from her book: The Capacity to Care. I am also sharing excerpts from poems by Sylvia Plath, Maya Angelou and Diane di Prima and an extract from Report to Greco by Nikos Kazantzakis’ about his mother. 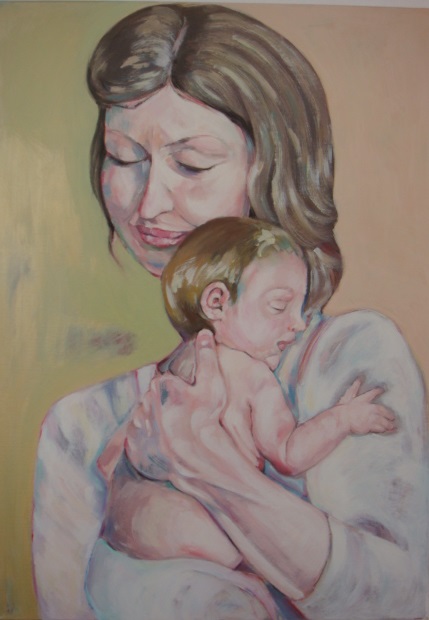 “How do women experience the changes involved in becoming mothers for the first time? When this is the question of an empirical research project, it poses a methodological challenge: how can research bring to light such experience; how can identity change be documented, conceptualized and written about. This book revolves around these methodological questions around which, addressed throughout via data from the ‘Becoming a Mother’ (‘BaM’) project. 19 women’s lives populate this book, as they become mothers for the first time, each unique and all having much in common amidst the diversity of East London.

I initially wrote this foreword in Oslo, where – just ten minutes walk from where I lived – Gustav Vigeland’s sculptures inhabit the park like a huge community, all naked and, at this time of the year, capped and shawled in snow. The mother image that I photographed and chose for the book cover expresses a theme that had been brewing in my mind for several years: the ineffable in maternal experience. Ineffable has two allied meanings, both coming from the Latin root ex – fare, to speak out. The first is ‘incapable of being expressed’; the second is ‘not to be uttered’. What is her wordless experience as she sturdily plants herself on all fours, with two children on her back? Her face is almost impassive. A conventional reading of the scene would be that she was playing a game with the children and indeed on one of the websites I found, this image is called ‘mother plays horse’. But I don’t find her expression playful, nor – to my eyes – is it resentful. Perhaps the children are playing horse, especially the boy on the front who is gleefully using her plaited hair as reins, complete with the part that works like a horse’s bit. The girl behind looks slightly askance. What imaginative world is their mother enabling them to inhabit? Perhaps she looks a little resigned, her body grounded in the present moment while her gaze is also somewhere else, looking forward, not down, into the middle distance ahead. Like most of Vigeland’s adults this mother is huge, with arms and legs as thick as pillars. Her back is not straining under the children’s weight; her hands are grounded like strong roots; her belly and breasts full and firm. In the background are other images of fecundity: the ant-heap of children and another, smaller number who look as if they are rooting for the mother’s nipples like a litter of piglets under the sow.

The feature of this maternal figure to which I am recurrently drawn is the tress across her mouth, not quite a horse’s bit (‘bite’) because it is not inside her mouth; more like a loose-fitting gag, with which she cooperates to keep it in place, cooperates in being wordless in her act of maternal bearing. This is the feature that suggests maternal ineffability to me and it is around this theme that I pattern the two interdependent themes in this book: maternal knowing (how – in what modes – do mothers know their pre-semantic infants?) and research knowing (how do researchers know about this partly ineffable maternal becoming?). In practice, how did we, the research team, learn about the mothers participating in our project?

Qualitative psycho-social research has largely been based upon what participants say, while this project recorded new mothers’ words as well as observing them in the wider context, often of family. Both interview and observation methods have gradually drawn me towards what is not said. The not-said manifests in many ways, each challenging researchers to ask if, when, how and how well we know. So the ineffability of maternal experience calls into play a parallel in the researchers’ experience in which the ineffable must be transformed so that it can be meaningfully communicated. If it is to some extent beyond words, how can it be researched and how validated? What methods do I have for grasping the maternal ineffable and what words and concepts might do justice to it? Has it got lost in discourses and representations of the maternal, with what consequences? Do maternal discourses also reflect what is not be uttered (what is taboo)?

Not everything about maternal experience is ineffable: mothers, like all human beings who have entered language, use language to make sense of their experiences and to communicate. What these 19 mothers say in the research setting forms a considerable part of the information on which this book is based. However, words act on many levels and this book is also about what exists on, behind and beyond the borders of language and symbolisation; that exceed it and escape it, and yet are communicative. This is knowing beyond cognition. If communication were only possible through language, it would be impossible to pursue or theorise the ineffable. As it is I illustrate researchers’ ways of communicating, experiencing and theorising experiences of knowing and not knowing about maternal becoming in the hope that it will expand our understanding of the early foundations of mothering as represented in the research project on which this book is based.”